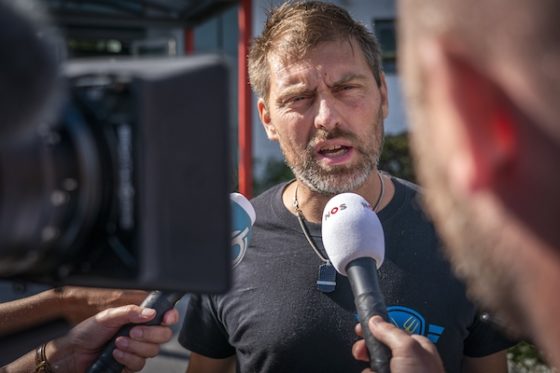 Radical farmers have promised to escalate their protests against the government’s nitrogen pollution plans, with Mark van den Oever from the Farmers Defence Force promising ‘the hardest action ever’.

‘If I taste the mood, I think you can prepare yourself for the hardest actions that FDF has ever taken part in,’ Van den Oever said. ‘We’re definitely going to escalate. We always come up with something special.’


Van den Oever’s comments came after farmers had met ministers for talks following weeks of protest, in which they had dumped farm waste on motorways and blocked supermarket distribution centres.

That meeting, aimed at clearing the air, had highlighted farmers’ ‘deep mistrust’ of government, mediator Johan Remkes told reporters on Friday afternoon. Nevertheless, he described it as ‘extremely constructive’.

FDF and Agractie, which are said to behind most of the more disruptive campaigning, had not taken part in the meeting directly. But Sjaak van der Tak, who leads the biggest farm group LTO and had spoken on behalf of the radical groups at the meeting, told Nieuwsuur that the campaign has to stay within the limits of the law.

‘If it does not, we will distance ourselves from it,’ he said. ‘We need public support.’

Meanwhile, a group of farmers who were stopped from driving on the A7 motorway by a police blockade on Friday night, caused further risk to other road users by turning round and driving back up the road on the wrong side, local media reported.

They were eventually forced off the motorway and up a slip road by another blockade.

Prime minister Mark Rutte on Friday also apologised for the publication of a map which showed where nitrogen-based pollution was causing most damage and how much it had to be reduced by. That map led to great consternation among farmers, who feared their farms would have to close.

Whats all the fuss about nitrogen in the Netherlands?

Rutte said in his apology that while the map had shown where the problem needed tackling, it did not show where farms would have to go or how much pollution needed to be reduced by. ‘Communication needs improvement,’ Rutte said.

The map had also been criticised by environmental experts, who have said it is far too detailed. It is being left up to provincial governments to decide how to cut nitrogen-based pollution in their areas.

Nevertheless, the government is sticking to its target of a 50% reduction in nitrogen-based emissions by 2030 in order to meet European environmental rules. Farming, mainly livestock, accounts for some 40% of nitrogen emissions in the Netherlands.

Finance ministry calculations suggest 11,200 livestock farmers would have to close down and a further 17,600 would need to reduce the number of animals they keep in order to meet the targets. The Netherlands has some 54,000 farms.