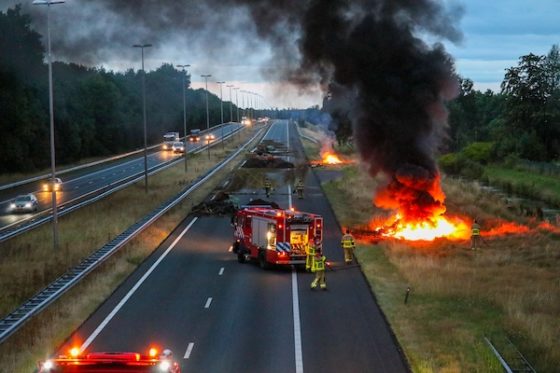 Protesting farmers again brought chaos to a number of busy commuter routes on Wednesday morning, setting fire to hay bales on the side of the road and dumping manure and other waste on slip roads.

The A1, A12, A28, A30, A35 and A50 were all closed or partially closed for a time and a number remain completely blocked, the transport department said.

The jams were particularly bad on the A1 between Amersfoort and Hengelo and traffic was brought to a standstill around Apeldoorn and on the A12.

‘This can lead to dangerous situations,’ a roads department spokesman told NOS radio. ‘It is not just the burning hay bales. It is everything on the roads which motorists have to avoid.’

The ANWB motoring organisation says motorists should be prepared to expect delays on some roads for most of the morning.

The farmers are protesting about government plans to tackle nitrogen based pollution, which mean some will have to close down their businesses.

Johan Remkes, who has been brought in to mediate between the government and farmers’ organisations, has now sent out official invitations to talks to a wide range of groups involved in the conflict.

However, the biggest farming organisation, LTO Nederland, has said it will not take part in any talks as long as the government remains committed to cutting nitrogen emissions by 50% by 2030.

It says the targets should also be part of the talks.