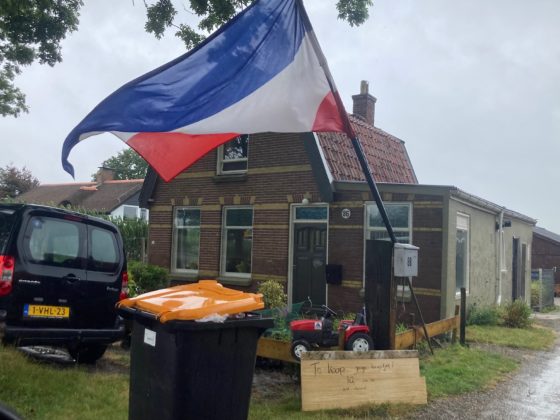 A protest flag outside a farm in Noord Holland. Photo: DutchNews.nl

The biggest Dutch farmers association LTO will present a ‘joint message’ to the cabinet at Friday’s meeting with government mediator Johan Remkes, the organisation has confirmed.

The decision to make a joint statement was taken at a meeting of eight different farming organisations and campaign groups about the the government’s plans to slash nitrogen emissions, which will have an impact across the industry.

Militant farmers groups Agractie and Farmers Defence Force (FDF) were among those taking part in the Nijkerk meeting on Wednesday evening.

‘I will give a message on behalf of all our organisations to the prime minister and two ministers on Friday,’ LTO chief Sjaak van der Tak said after the talks. ‘You might not believe it, but there is more unity [among farmers] than ever before.’

Remkes has invited 20 farming organisations to Friday’s talks, which will also be attended by prime minister Mark Rutte and farm minister Henk Staghouwer.

The talks follow weeks of protests by radical groups, which have involved blocking roads with manure and other farm waste, blockading roads and supermarket distribution centres with tractors, and protests outside government buildings.

The LTO had said earlier it would not take part in any talks as long as the government remains committed to cutting nitrogen emissions by 50% by 2030. It, and the other groups involved in the joint statement, says the targets should also be part of the talks.