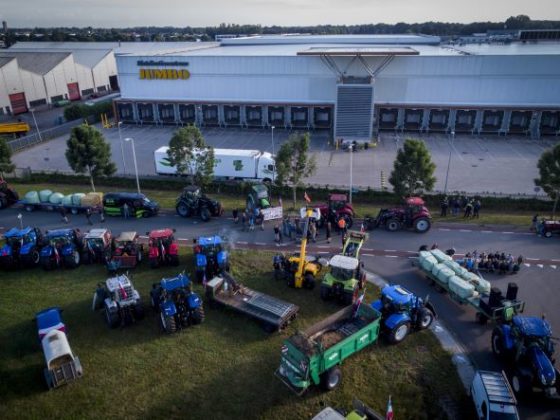 Police yesterday advised people to work from home after farmers threatened to bring the entire country ‘to a standstill’. Protests are also expected around Schiphol airport on Monday, which has called for travellers to come by public transport.

The Dutch army is also ready to step in if there is a threat to national safety, police announced on Sunday.

Dutch media report that farmers have blocked the entrance to the A50 motorway in Veghel, where there is a Jumbo supermarket distribution centre. They have also blocked roads in Heerenveen (Lidl), Drachten (Aldi), Raalte (Jumbo), Deventer (Aldi), Haaksbergen (Plus), Woerden (Jumbo), Breda (Jumbo) and Nijkerk (Boni).

Three Albert Heijn centres were also reportedly been blocked on Monday morning, in Zaandam, Giessenburg and Zwolle, while farmers have also taken action around Tata Steel in IJmond and the A9 Gaasperdammertunnel.

Explainer on the nitrogen compound problem

Meanwhile, fishermen are also protesting by blocking Lauwersoog harbour with ships in protest at higher fuel prices and less room at sea due to wind farms. On Friday, the government announced a €444 mln support package to help the industry become ‘smaller, more diverse and more sustainable.’

Roads, however, were quiet – reported NOS – as people took the advice to avoid unnecessary travel and use public transport.