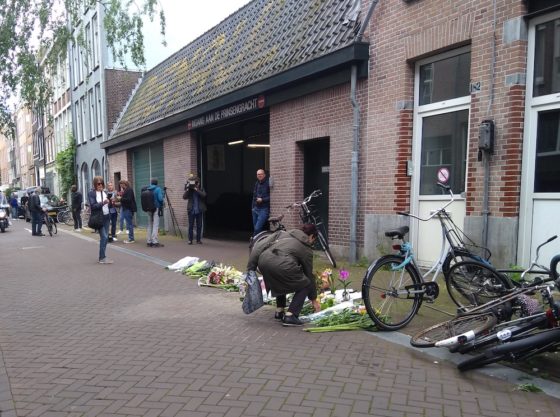 The garage where De Vries was shot. Photo: DutchNews.nl

There is mounting speculation that the shooting of Dutch crime journalist and television presenter Peter R de Vries may be connected to his role as confidant of one of the main witnesses in a massive gangland trial.

De Vries is no stranger to being threatened, however, and has always taken the threats with a hefty dose of stoicism. He has also not been afraid to take the victim’s side, particularly in unsolved murders.

Here’s a list of some of the high profile cases he has been involved with.

Marengo trial
De Vries is currently supporting crown witness Nabil B in the trial of gangland leader Ridouan Taghi and 16 others which is due to resume in September. De Vries is known to have been threatened by someone within his operation, although Taghi has denied any involvement.

Taghi’s lawyer Inez Weski has also condemned the suggestion that her client could be linked to the De Vries shooting, issuing a strongly-worded statement criticising the lack of objectivity in the reports.

In the Marengo case the defendants are charged with six murders, four attempted murders and planning several more.

Nabil B’s brother Redouan B was shot dead at his office in Amsterdam in April 2018 by a hitman posing as a job applicant. Then in 2019, lawyer Derk Wiersum, who was acting for Nabil B, was also shot dead in Amstelveen. That trial begins next week.

Willem Holleeder
De Vries started his career with the Telegraaf newspaper and followed the Freddy Heineken kidnapping case for the paper, later publishing a book about it.

Years later, De Vries was an important witness at another trial in which kidnapper Willem Holleeder was found guilty of being involved in five murders and sentenced to life in jail. In particular, he acted as a go between between Holleeder’s sisters and the public prosecution department.

Natalee Holloway
De Vries was instrumental in bringing about the conviction of Joran van der Sloot for the murder of Natalee Holloway after he used hidden cameras to record Joran confessing to his role in the girl’s death to a friend. That 2008 confession led the Aruban authorities to reopen the investigation into the 2005 death. The programme won De Vries an Emmy.

Nicky Verstappen
In 2019 De Vries’ intervention led to a breakthrough in the murder of Nicky Verstappen, 20 years after he was taken from the tent he was sleeping in and killed. That breakthrough led to the arrest of Jos B and his eventual 12 year jail term for the boy’s kidnapping and murder.

Berthie Verstappen, who was supported by De Vries during her campaign to find out who had killed her 11-year-old son Nicky said the news of the shooting is ‘terrible.’ ‘He always fought for us and for Nicky and we hope that he is now fighting for himself,’ she said.

Tanja Groen
Tanja Groen vanished on August 31 1993 on her way home from a party at the Circumflex student society in Maastricht. She left the party around midnight to cycle home to her lodgings in Gronsveld but was never seen again.

De Vries has been supporting the family in their efforts to get the case reopened and recently launched a hotline to both raise money and look for tips in an effort to solve her disappearance.

Putten murders
One of the biggest cases De Vries has been involved in was the murder of 23-year-old Christel Ambrosius who was found dead in 1994 at the home of her grandmother.

Two local men served 10 years in jail for the killing but De Vries became involved when they continued to protest their innocence. In 2002 they were found not guilty and given €900,000 compensation.