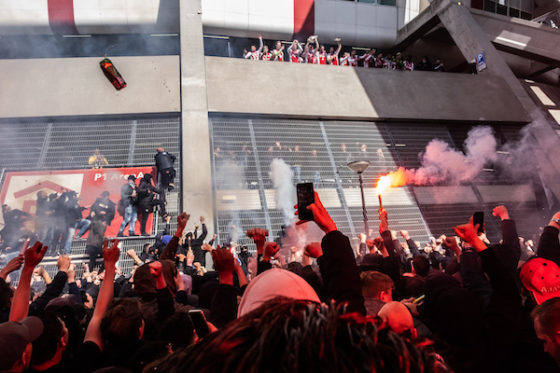 A press photographer who was attacked as he was taking pictures of the Ajax league title win celebrations on Sunday has filed an official complaint with the Amsterdam police.

The photographer, who wishes to remain anonymous, works for the Associated Press. He had come to the stadium where some 12,000 fans had gathered, defying coronavirus rules.

The photographer said the mood turned from festive to menacing when the crowd moved to the main entrance of the stadium. There the players and club CEO Edwin van der Sar had gathered on a balcony overlooking the square to show off the trophy in what Ajax said was ‘spontaneous gesture’.

As he was trying to photograph the event the photographer was called a ‘f…… photographer’ and was kicked in the back. He was then hit on the side of the head with full can of beer when he tried to make good his escape.

Tony Hicks, deputy director of the Associated Press said he will raise the matter with the authorities and the NVJ journalists union. He said he may also file an official complaint against Ajax. ‘We are taking the safety of our staff extremely seriously,’ he told the Parool.

Police are investigating the case, a spokesman told the paper. ‘It is very serious if the press are kept from doing their job and we will pursue this,’ he said. The police are calling for witnesses to come forward.

In April, another press photographer was viciously attacked by bystanders as he was trying to photograph a reported car fire on a country road near the Gelderland town of Lunteren.