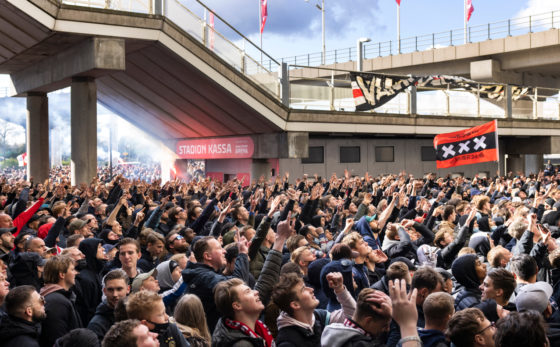 Ajax fans massed outside the stadium after the 4-0 win over Emmen. Photo: ANP/HH/Ramon van Flymen

Fifteen people have been arrested after 12,000 Ajax fans crammed the square outside the ArenA to celebrate the club’s 35th Eredivisie title.

The arrests on Sunday were mainly for offences such as carrying fireworks and weapons, a spokesman for the city council told AT5. Police decided not to step in to enforce coronavirus restrictions for fear of provoking an ‘escalation of violence’.

The players and club CEO Edwin van der Sar gathered on a balcony overlooking the square to show off the trophy after clinching the championship with a 4-0 victory over FC Emmen. Ajax said the display was a ‘spontaneous gesture’ that had not been arranged with supporters.

A spokesman said: ‘We are very aware of our responsibility, but in view of the huge number of fans that had gathered outside this was probably better than ignoring them.’

At the request of police the players went back into the stadium and the crowd dispersed by around 7pm.

The city council imposed an emergency order on Sunday banning public meetings on Leidseplein, where Ajax fans normally celebrate the club’s successes. There was also a ban on drinking alcohol and the cafes around the square were closed.

Nevertheless, a number of councillors have asked city mayor Femke Halsema to explain why police did not intervene to break up the spontaneous celebrations. Ministers too have described the festivities as ‘irresponsible’.