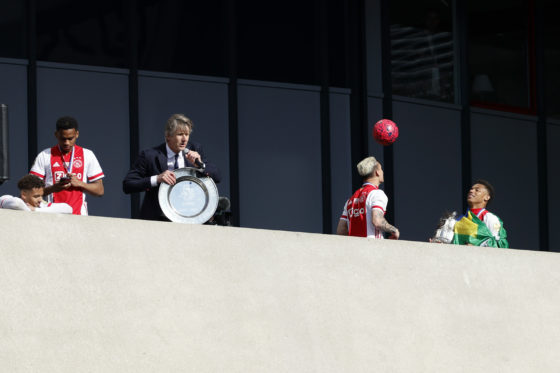 A dominant second-half performance secured Ajax’s 35th Eredivisie title as they ran out 4-0 winners against Emmen in Amsterdam.

After Dusan Tadic put the home side ahead in the ninth minute, the Drenthe side held firm until Sebastian Haller slotted home a second just after the hour mark. Devyne Rensch and a diving header by Davy Klaassen completed the scoring.

The silver plate was presented to the players in an empty Johan Cruyff Arena and later held aloft from a window to thousands of fans who had massed outside the stadium. The traditional celebration on Leidseplein was banned by the city council because of coronavirus restrictions.

All 18 clubs had something to play for with four matches of the season left. AZ Alkmaar closed the gap on second-placed PSV to a point after coming from behind to win 3-1 at RKC Waalwijk.

PSV were left ruing missed chances after they turned around a 1-0 deficit at home to Heerenveen with two goals in a minute from Yorbe Vertessen and Cody Gakpo. But the lead lasted just 75 seconds as veteran midfielder Lasse Schöne ghosted through the PSV defence and set up Siem de Jong for the equaliser.

ADO remain three points behind VVV Venlo, who lost their 12th straight league match at Heracles, with Sinan Bakis netting a hat-trick. To make matters worse, the Limburgers lost the league’s top scorer Georgios Giakoumakis after an hour as the striker limped off with an injury.

That result strengthened eighth-placed Heracles’s claim on one of the two available play-off slots for the Europa Conference League, while Fortuna Sittard stayed in contention with a 3-0 win over rivals FC Twente

Sparta Rotterdam are level on points with Fortuna after surviving a late scare at Groningen when they were 2-0 ahead. A defensive blunder allowed Ramon Pascal Lundqvist to pull a goal back for the home side in the 87th minute, and Groningen should have equalised when Paulos Abraham missed an open goal from three metres out in the last minute.

Utrecht secured their play-off place with a 3-2 win over Willem II, for whom Sven van Beek netted the seventh own goal of his career to set an unenviable league record.