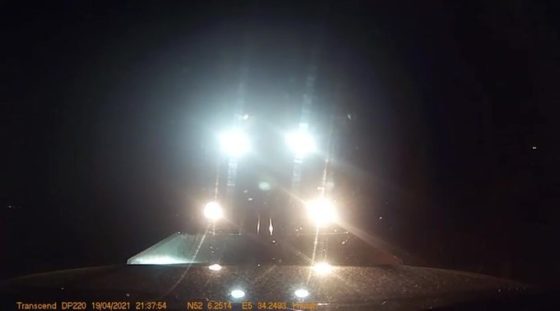 A still from the dashcam video, as the vehicle approaches

The police have launched an investigation into an incident in which an official press photographer was attacked by several men at the scene of a countryside car fire, who used a shovel truck to push the car he and his girlfriend were in upside down into a ditch.

The freelance photographer, named only as Timothy to protect his identity, said he and his girlfriend were on their way home when he saw a reference to a car fire on a country road near the Gelderland town of Lunteren and decided to take some photos.

After getting out of the car to take a photograph of the fire engine at the scene, Timothy says he was approached and threatened by four men. Firstly, they used a truck to push his car to the side and then attacked the vehicle with sticks. They then used the vehicle to tip the car into the ditch, as Timothy was on the phone to the emergency services.

‘We were terrified,’ Timothy said. The horrific attack was captured on the vehicle dashcam.

The fire brigade had to cut Timothy and his girlfriend free from the car, and they were treated for their injuries at the scene. ‘I am in pain everywhere,’ Timothy said, who has cuts in his back from the broken glass.

Two other journalists who were also at the fire to take photos were also threatened by the men.

Dutch journalists organisations have condemned the attack as ‘a new low point in the circumstances in which journalists have to do their job.’

The police say that the driver of the digger has been arrested, as has another man who threatened two other photographers.

‘We give the highest priority to tracking down and prosecuting cases of aggression and violence against journalists,’ the police press release said. ‘Journalists have to be able to do their job.’

As yet no-one has yet said what sort of car was on fire and what the men, thought to number six or seven in total, were doing there. There are several farms in the neighbourhood, but according to the Gelderlander, no-one had witnessed the attack or knew what was going on.