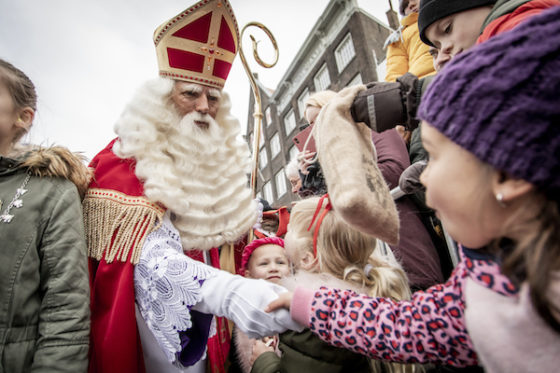 Sinterklaas parades in many parts of the Netherlands passed off peacefully on Saturday, as large numbers of police officers were drafted in to head off any trouble involving pro or anti-Zwarte Piet demonstrators.

In Apeldoorn, where the main parade took place with only sooty-faced Piets, 12 people in blackface were arrested for refusing to go to the space allocated for demonstrators. Their number included Edwin Wagensveld, leader of the far-right Pegida movement in the Netherlands.

Nevertheless, mayor Petra van Wingerden-Boers said the parade had been ‘fantastic’. Some 25,000 turned out to watch Sinterklaas arrive by steam train and kick off the count-down to the December 5 festivities.

The situation was tense for a time in Emmen, Leeuwarden and Groningen, broadcaster NOS reported, but there were no major problems as in 2018, when pro-blackface demonstrators attacked anti-Piet campaigners and hundreds of arrests were made.

In Emmen, in the northern province of Drenthe, police used their batons to stop a group of men attacking five anti-Zwarte Piet campaigners and the parade route was changed to avoid any trouble.

In total, anti-blackface campaigners demonstrated at six locations nationwide, including in The Hague, where a meeting of the Kick Out Zwarte Piet group was attacked earlier this month. The organisation plans to present a petition to prime minister Mark Rutte, expressing its disappointment that he has not condemned the violence.

The rally in The Hague attracted a few hundred protesters.

The Amsterdam parade takes place on Sunday. The city has been gradually phasing out blackface Piets and this will be the second year without any in the official pageant.

Around 46 muncipalities, including nine of the 10 largest cities, are including sooty-faced Petes in their Sinterklaas parades this year, while the NTR, which broadcasts the children’s TV show Sinterklaasjournaal, has dropped blackface Piets altogether.

The shift away from traditional Piets which groups such as KOZP argue are a racist caricature, is most concentrated in the coastal cities and surrounding areas. Around one-third of Dutch people live in communities which still use exclusively traditional Piets.

Research published by I&O a year ago found that 44% of people questioned supported the introduction of ‘sooty-faced’ Piets or other variations in appearance, compared to 32% when the survey was last carried out two years ago.

There was also an anti-Piet demonstration on the Caribbean island of Curacao, a former Dutch colony.