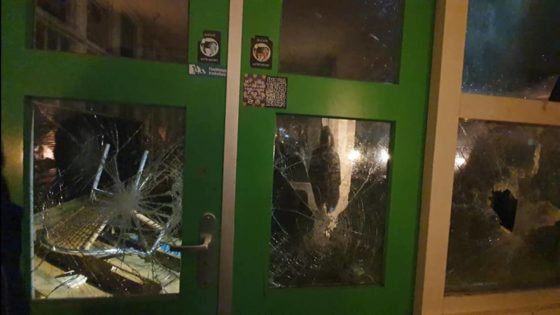 Windows were smashed at the KOZP meeting on Friday. Photo: Mitchell Esajas/Facebook

Protest group Kick Out Zwarte Piet (KOZP) has accused police of failing to protect its members’ safety after a weekend in which four people were arrested for violently breaking up a meeting.

The group said it was arranging private security for demonstrations in 12 municipalities where traditional Zwarte Pieten, or ‘black Petes’, played by white actors in blackface make-up, are taking part in the Sinterklaas arrival parade.

‘Our experience is that the police and government are not taking the real threats against us seriously,’ KOZP spokeman Mitchell Esajas said. ‘It is becoming increasingly dangerous for us.’

A meeting of activists on Friday evening in The Hague was broken up by vigilantes who smashed windows of the building, attacked it with fireworks and vandalised cars parked outside. Police arrested five people, one of whom has since been discounted as a suspect. One of the suspects was a 13-year-old boy.

‘It felt as if we were locked in,’ said Esajas. ‘And if they’d got inside I’m worried that it wouldn’t have just been cars that were damaged.’

The group has also filed a police complaint against The Hague businessman John van Zweden, who posted tweets on Friday afternoon calling on people to turn up to the protest ‘with tar, feathers and other shit to drive them out of the city.’

The wallpaper magnate, who became a multi-millionaire through his involvement with Welsh football club Swansea City, has since deleted the tweets. KOZP described the messages as ‘inflammatory’, while Van Zweden told NOS: ‘I’m not giving any more reactions on this issue.’

Police declined to respond to KOZP’s comments when contacted by NOS.

Around 46 muncipalities, including nine of the 10 largest cities, are including sooty-faced Petes in their Sinterklaas parades this year, while the NTR, which broadcasts the children’s TV show Sinterklaasjournaal, has dropped blackface Petes altogether.

The shift away from traditional Petes, which groups such as KOZP argue are a racist caricature, is most concentrated in the coastal cities and surrounding areas. Around one-third of Dutch people live in communities which still use exclusively traditional Petes.

Terrorism expert Teun van Dongen told NRC that the latest incident reflected the radicalisation of the so-called ‘pro-Pete’ movement, as white supremacist groups such as Pegida and football hooligans have adopted the cause in recent years.

‘What we saw on Friday was a move towards extremism,’ he said. ‘It’s fairly unique to have dozens of people joining in.’

Van Dongen said violence was becoming normalised within the pro-Pete movement. ‘You can see it not just in reports on social media, but also in politics. Parties are saying things that can hardly be distinguished from what extreme right-wing groups are calling for.’