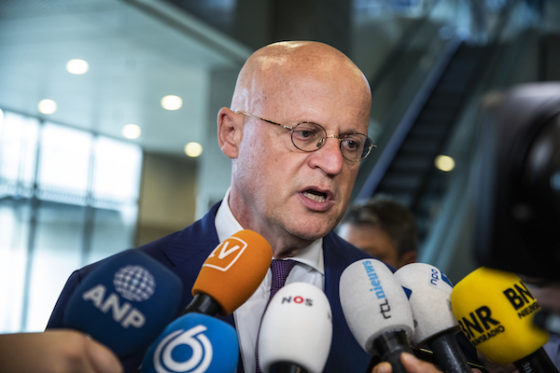 Derk Wiersum, who was representing Nabil B, a key witness in the case against gangland boss Ridouan Taghi, was shot dead in Amsterdam on Wednesday morning outside his home.  Last year Nabil B’s brother was also shot dead, in what is thought to have been a warning to Nabil not to testify.

The aim of the meeting is to try to decide what more can be done to guarantee the safety of lawyers involved in cases of this kind, Grapperhaus told reporters.

The chief public prosecutor Fred Westerbeke told current affairs show Nieuwsuur on Wednesday evening that measures have also been taken to protect everyone involved in the case against Taghi.

The counter terrorism unit NCTV is also involved in the investigation into the murder.

Westerbeke told Nieuwsuur that Wiersum had discussed safety issues with officials and that some steps had been taken but that murder had not been one of the scenarios under consideration.

The AD says in an analysis that the killing of a lawyer marks the beginning of a ‘new, dark phase’ and shows that the underworld is prepared to directly attack the rule of law.

Lawyers, public prosecutors and judges go about their business unguarded, the paper said. ‘The Netherlands is, or was, a country in which the prime minister cycles to work,’ the paper said.

Yet despite Grapperhaus’ anger at the killing, he is also aware that the underworld is tightening its grip on society and that a quarter of the country’s mayors have been threatened by criminals, the paper points out.