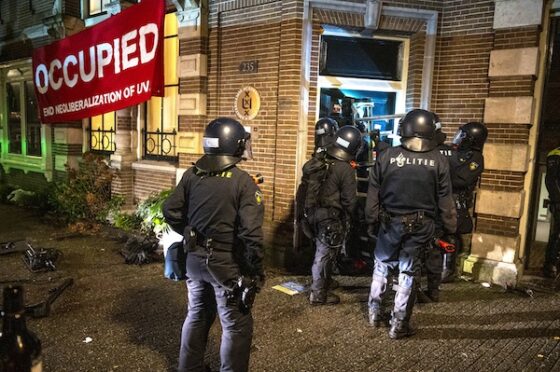 Police in action during the occupation. Photo: Evert Elsinga ANP

Riot police were drafted in to end the occupation of a vacant university building in the centre of Amsterdam on Monday night after campaigners calling on the UvA to break ties with Shell barricaded themselves inside.

In total, 30 people were arrested inside and outside the building on the Oudezijds Achterburgwal. The police action ended shortly before midnight.

A university official had said earlier in the day that peaceful demonstrations are acceptable but not occupations.

The students and other protestors say Shell is funding at least four green energy research projects at the university. ‘But at least 95% of Shell’s finances go toward the fossil fuel industry,’ history student Carlos told the Parool.

‘All the UvA is doing is helping with Shell’s marketing programme,’ fellow student Itai told the paper. The students are also protesting about the way Shell staff give guest lectures and interviews and attend university events, the paper said.

Several lecturers also spoke out in support of the students action, and said they were angry that the university had called in the riot squad.