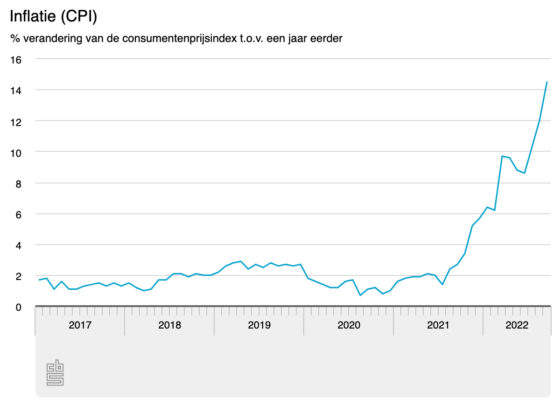 Inflation calculated according to Dutch methods

The annual rate of inflation in the Netherlands hit 14.5% in September, when calculated according to Dutch methods, national statistics office CBS said on Thursday. In August, the figure was 12%.

Even without the impact of higher energy and fuel costs, inflation would still have risen from 6% in August to 6.5% in September, as clothing, food and the public transport all went up in price.

Inflation has shown an upward trend for 13 months.

Calculated according to the harmonised European method, inflation reached 17.1% in September, a figure described by finance minister Sigrid Kaag at the end of last month as ‘shocking’.

The main difference between the two systems is that the CPI includes rental housing developments and the Eurostat harmonised index (HICP) system does not.

The euro area annual rate of inflation is 10% and the Dutch figure is by far the highest in the eurozone, with the exception of the three Baltic states. In neighbouring Germany the rate was 10.9% in September and in Belgium 12%.

The CBS also said on Thursday that salaries were up by an average of 3.4% in pay deals agreed in the third quarter of the year. This is the largest increase since the first quarter of 2009, when wages rose by 3.6%.

This is well below the increase needed to keep pace with price developments.

However, employers advisory group AWVN said earlier that wage deals finalised in September included an average pay rise of almost 5%, the highest figure since the end of the 1970s.