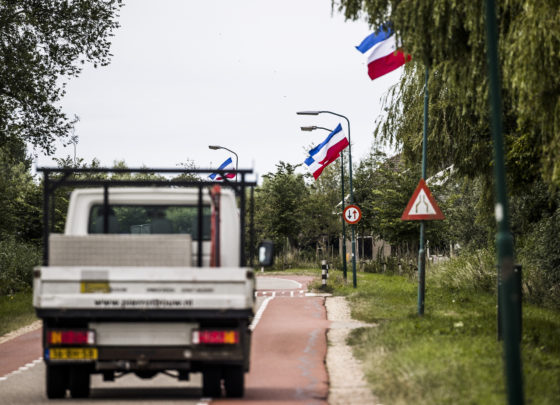 Highways agency Rijkswaterstaat has removed a number of flags hanged by supporters of the farmers’ protests from bridges and viaducts.

A spokesman said roads inspectors had taken the flags away ‘not because our service is for or against farmers, but on safety grounds.’ He said: ‘They can’t be properly fastened and fall down, and they distract the traffic.’

The Dutch flag hung upside down, with the blue stripe on top, has become a symbol of the protests against the government’s plans to cut nitrogen compound emissions, reflecting a popular but untrue belief that it represents a distress signal.

Municipalities have also removed a number of inverted flags that have been attached to public buildings and street furniture. Hoogeveen in Drenthe has ordered all lamp-posts, traffic lights and buildings to be stripped of flags by 2pm on Friday.

‘Farmers that want to talk to the municipality are very welcome to do so,’ said a spokesman.

Some local authorities have taken a more hands-off approach. The provinces of Utrecht and Gelderland told NOS they will leave the flags hanging unless they threaten public safety.

‘Nowhere does it say in the law that you’re not allowed to hang the Dutch flag upside down,’ said a spokesman for Utrecht province. ‘The line is drawn at provocative slogans, such as racist and sexist slogans.’

In Friesland, several provincial assembly members have submitted official complaints to the police after being threatened or targeted by protesters.

On Wednesday the assembly house in Leeuwarden was evacuated for three hours while police investigated a ‘credible’ bomb threat. Investigations are ongoing to identify the source of the threat.

Jaap Stalenburg, a deputy with the Labour party (PvdA), told Nieuwsuur: ‘I saw people leaving the building yesterday, they were in shock. I know colleagues who haven’t slept at home for months and others who’ve had farmers standing in their gardens yelling.

‘At some point it has to stop. Enough is enough.’

Harold van de Velde, chair of the provincial deputies’ association, urged representatives to report incidents to the police after a survey indicated that more than half had been threatened, but only 7% had filed an official complaint, which the police need to start an investigation.

‘We are part of the public administration and we need to stay public. Let’s take a stand without turning the provincial assembly into a fortress,’ he said.