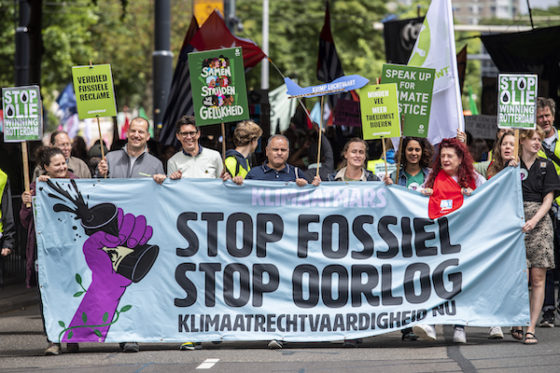 Some 10,000 people took part in Sunday’s Climate March in Rotterdam in the biggest demonstration of its kind in the port city.

Representatives from political parties walked alongside agriculture and food organisations, trade unions, self-proclaimed anarchists wearing balaclavas, and youth collectives, while parents carried their children. Some demonstrators were in wheelchairs.

‘We don’t belong to a group but everyone should be doing something right now,’ Renske (47), who joined the march with her daughter Maud (13), told DutchNews.

‘Going to this kind of event is not something I usually do but you need to get out of your comfort zone to change something.’

The march had a two-fold focus: to press the Dutch government to act and to express disappointment about existing climate policies.

‘We really need and want meaningful action,’ said Vatan Hüzeir, 36, a spokesman for the Climate Crisis Coalition. ‘The fossil fuel industry must be dealt with appropriately.

‘The climate crisis is down to the government support that this industry has had over the past decades, in the form of subsidies, unlimited access to politicians, or commercials where fossil fuel companies can greenwash their products.

‘We’re super disappointed by what the government is doing now. The climate policies in place are not enough.’

Many of those present were disappointed by the Dutch government’s lack of action. ‘I would like the government to care more about climate and do something instead of just saying they will do what they promise,’ said Gista, 15. ‘The big companies should be punished,’ added Wij, 15, who walked alongside her. 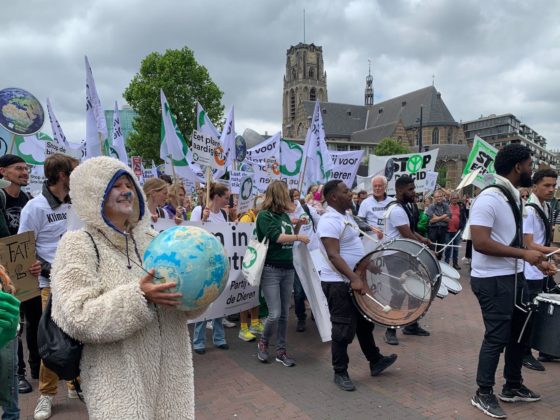 ‘The way our government deals with this problem [global warming] should really change,’ said Marijn, 35, who joined the march with her friends. ‘I was raised with the idea that this [Dutch climate policy] should change and it has not done that yet.’

Joop (70) shared the sentiment: ‘I joined the march because maybe it will help a little bit. I doubt [that it will] but we have to try. Things keep going the wrong way but we have to do what we can.’

The march organisers also argue that climate change impacts communities differently, with people living in the global south, which contributes the least emissions, suffering disproportionately. To highlight this, a group of indigenous women from the Amazon performed the opening act.

‘It’s important we go for just change, not just for change,’ said Manuwi C Tokai, an indigenous woman from the Kaikoesi tribe in Surinamese Amazon and one of the performers. ‘A lot of processes in climate change that are invisible to the West are felt by  indigenous peoples fighting on the front lines.’

Last year the Dutch Environmental Assessment Agency predicted a decrease of between 38% and 48% in 2030, meaning the country will not meet its targets.

‘We want the politicians to understand that there is mass and diverse support for radical climate action,’ Hüzeir said. ‘Now the ball is in their court.’