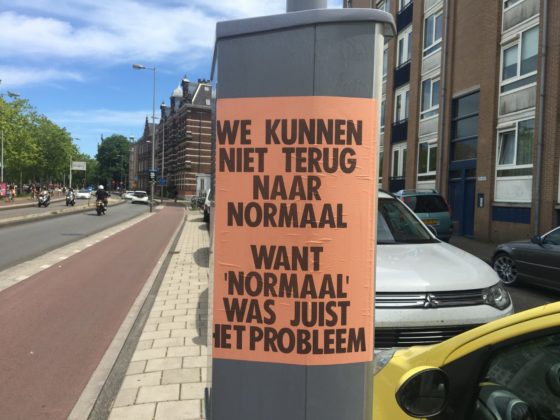 ‘We cannot go back to normal, because ‘normal’ was precisely the problem.’ Photo: DutchNews.nl

The Netherlands faces a ‘major task’ when it comes to implementing current climate and energy policy changes as ‘vigorously as possible’ as well as meeting the EU’s own proposals and targets, the Dutch environmental assessment agency PBL said on Thursday.

Dutch greenhouse emissions are expected to decrease by between 38% and 48% in 2030, when compared with 1990 and that means the government’s 49% target is likely to be missed, the PBL said in its annual report on climate and energy policy.

Concrete measures taken over the past year for industry, and the mobility and transport sector, will lead to a decrease in emissions, the PBL said. However, much of this will be down to carbon capture and storage, rather an energy saving, electrification and a reduction in other greenhouse gasses.

This means additional measures will have to be taken to hit the government’s target for 2030 and to meet EU ambitions, the PBL said.

In particular, the EU’s ‘Fit for 55’ package of measures is not yet concrete enough to close the gap to meet the 49% target. Many of the proposals and ambitions may change substantially during the decision-making process and, in any case, will ‘undoubtedly require a large additional effort by the Netherlands,’ the agency said.

At the same time, the government’s most senior policy advisory unit, the Raad van State, said on Thursday that the Netherlands will not meet its own climate targets and will need to take additional measures to do so.

Even though the government is currently acting an a caretaker capacity there is no time to waste and it still has to do what is necessary, the Council of State said in new recommendations.

The Council of State says that extra structural and substantial measures are needed and those announced by the government in September are not enough. Parliament itself has a responsibility to ensure this happens too.

In particular, climate policy needs better coordination at a national level and this will require a minister in the next government with specific responsibility for climate strategy, the Council of State said.

In addition, current climate legislation needs to be amended substantially and should include targets on renewable energy and energy efficiency.

GroenLinks leader Jesse Klaver said in a reaction that the Council of State has ‘rightly’ made  mincemeat of climate policy, while Christine Teunissen of the pro-animal PvdD said the cabinet’s optimism about reaching the targets is unjustified.

Ed Nijpels, who was responsible for drawing up the Dutch climate agreement in 2018, said climate policy must be ‘at the heart of a new coalition agreement’.