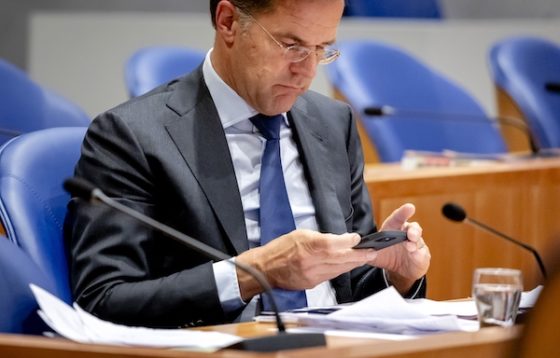 Prime minister Mark Rutte came under heavy fire in parliament on Thursday during an emergency debate on his text messaging habits, but despite MPs best efforts, he refused to concede he had done anything wrong.

Earlier this week, the Volkskrant revealed that Rutte still used an old Nokia phone and that he deleted text messages that he did not consider relevant rather than archive them all.

Opposition MPs said Rutte’s action was part of the same pattern of ‘forgetting things’ – referring to the bombing of Hawija, the Pieter Omtzigt memo, and documents about dividend tax.

But Rutte, whose voice sounded hoarse and whose expression was taut, made it clear he was not interested in having his face rubbed in the facts, the NRC reported. ‘Every event,’ Rutte said ‘no matter how unjustified, is said to be part of a pattern and gets labelled.’

‘Is it any surprise that people are no longer interested in watching debates on television?’ he told MPs.

Rutte said emphatically that he had acted within the law and within the spirit of the law. Every message of value had been sent on to civil servants and longer messages were recited over the phone, he said.

Since the May holidays, Rutte said, he has an IPhone, after noting that he was not always available during a holiday in New York. ‘I am now fiddling around on that smart phone and it is hellish,’ he said.

Asked by GroenLinks leader Jesse Klaver if he would say how many messages he had kept or sent on to civil servants, Rutte said ‘no’ and later pledged a written answer on the issue at a later date.

Government inspectors have also announced that they will look into the issue.