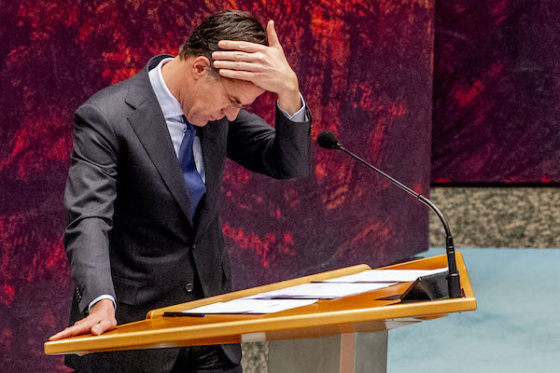 Dutch prime minister Mark Rutte was fighting for his political life on Thursday afternoon after it emerged that he had mentioned the possibility of another job for a highly critical CDA MP during cabinet formation talks.

Thursday’s parliamentary debate on the coalition talks debacle started and then were suspended after it emerged Rutte had discussed the position of outspoken Christian Democrat Pieter Omtzigt with officials after all.

Rutte said earlier that he was not responsible for suggesting that Omtzigt could be given a job elsewhere when talking to the two scouts appointed by parliament to assess potential coalitions with party leaders.

The comment was made on notes carried by scout Kajsa Ollongren and visible to the press when she left parliament after testing positive for coronavirus last week.

The note implied that Omtzigt – a staunch critic of the current coalition government – might be offered another job to get him out of parliament. But the fact that an individual MP was mentioned in the coalition talks, and by another party leader, would be highly controversial and could be seen as an effort to silence him.

Rutte, who denied lying, told MPs he had been reminded in an early morning phone call that it was him who mentioned Omtzigt’s name in talks with Ollongren and Annemarie Jorristma last week.

‘This morning I was rung by someone who said that I had mentioned Pieter Omtzigt’s name after all,’ Rutte told MPs. ‘But I am not going to name my sources.’

Other party leaders were not given the notes taken at their meetings with Ollongren and Jorritsma until 9.30am.

MPs from across the political spectrum accused Rutte of either lying or having a very bad memory.

D66 leader Sigrid Kaag said during the debate that there is a pattern in Rutte’s forgetfulness. ‘How can this happen, and how can you, as possibly the longest serving prime minister, win back confidence,’ she said.

Rutte’s comments, she said, ‘are not good, and not good is an understatement’.

Jesse Klaver, leader of GroenLinks, said that it is ‘very coincidental’ that Rutte always says he has no recollection of things when in a difficult situation.

Commentators in The Hague are now suggesting that Rutte has no option but to stand down as caretaker prime minister. He also faces a vote of no confidence later in the evening.