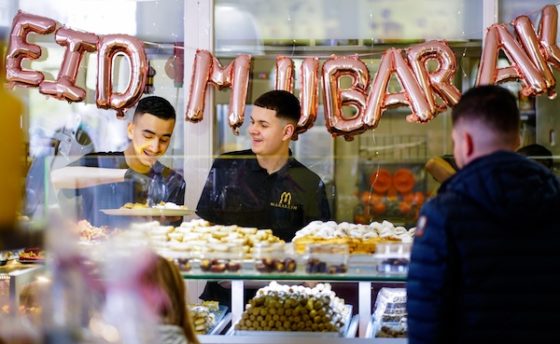 It is peak period at this bakery in The Hague. Photo: Marcel de Swart ANP

Muslims in the Netherlands celebrate the end of Ramadan, or the festival of Eid al-Fitr, on Monday, but the Dutch term for the holiday, the Suikerfeest or sugar holiday, is increasingly out of favour, news website Nu.nl reported.

Suikerfeest is a literal translation of the Turkish Şeker Bayramı but that in itself may be a misinterpretation of Şükür Bayramı (feast of thankfulness), which once was the name for the celebrations to mark the end of the fasting period in Turkey.

Muslims in the Netherlands now want to get back to the real meaning of Eid al-Fitr – the holiday of breaking the fast, Nu.nl said.

After all, Muslims point out, ‘sugar feast’ implies they are eating sweets all day, but Eid al-Fitr is about far more than that. It is a day for dressing up, giving gifts and money to charity, and greeting each other with the phrase ‘Eid Mubarak‘.

There is, he said, a swing away from term on social media. ‘People would rather the term is not used,’ he said.