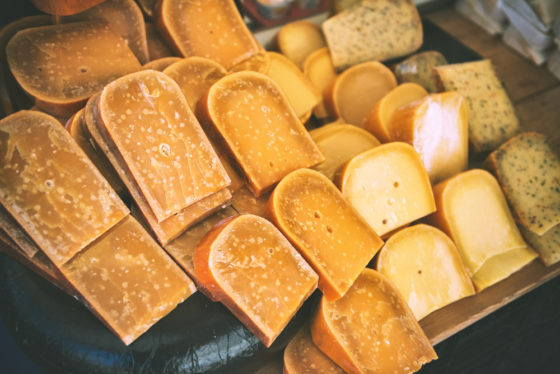 Thieves have made off with 1,600 kilos of cheese worth €21,000 from a dairy farm in Fijnaart in Noord Brabant, in the latest in a series of cheese heists in the Netherlands.

Almost all the cheese from the farm’s storage was taken and that has set the farm back some six months in income, the farmer told RTL Nieuws.

‘This is not just a simple theft, it’s organised crime,’ Dekker said. ‘These gangs are not afraid to use violence. They’ll load up and off they go.’

The thieves usually visit the farm shop a couple of days before to get the lay of the land so they know exactly what to take, Dekker said.

‘We have had reports of cheeses ending up in Russia where no Dutch dairy can be bought because of the economic sanctions,’ Dekkers said.

The stolen cheeses carry a unique code which means it is unlikely they are being sold in the Netherlands.

Cheese farmers were plagued by a string of cheese thefts a couple of years ago and this week’s heist may be a sign of things to come, Dekker said.

His organisation is also keeping an eye on online cheese sellers. A batch of stolen cheese was offered for sale on Marktplaats last year and traced within 15 minutes. ‘But those were amateurs and cheese farmers are now up against something bigger,’ Dekker said.