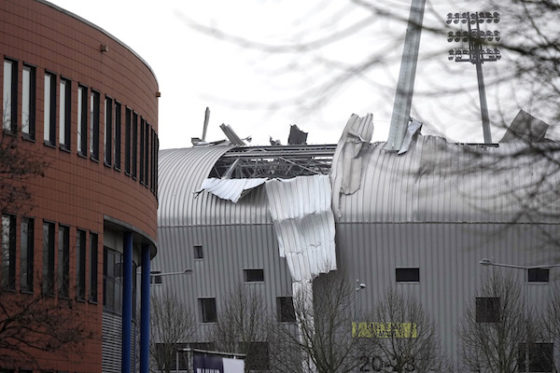 The death toll in Friday’ storm had reached four by mid evening as winds of up to 145 kph hit coastal regions.

Three people were killed by falling trees in the Amsterdam area and in Groningen a car driver died when their vehicle ploughed into a tree which had fallen across the road.

An elderly women from Boekel, in Noord-Brabant, was also taken to hospital after she was hit by a falling tree, breaking several bones. Her condition is said to be serious.

Storm Eunice moved into northern coastal areas on Friday evening but strong gusts are expected all over the country until around midnight, weather forecasters say.

Police issued an NL-Alert at around 5pm after emergency service numbers became overloaded with calls. They urged people not to ring 112 unless it was a matter of life or death.

Storm Eunice brought down hundreds of trees all over the country and footage on social media showed several narrow escapes, some involving cyclists.

In The Hague, part of the roof of the ADO Den Hague football stadium on the edge of the city blew off, and several people were evacuated from their homes near the city’s Elandkert, after one of the towers began to wobble.

They were allowed back home after structural engineers said the tower was safe.

All over the country there were reports of damage to buildings.

The transport ministry’s roads department and railway company NS both warned that there will still be considerable disruption on the roads and railways on Saturday, as work continues on clearing debris.

In particular, dealing with lorries that have blown over is taking time, a roads department spokesman said.