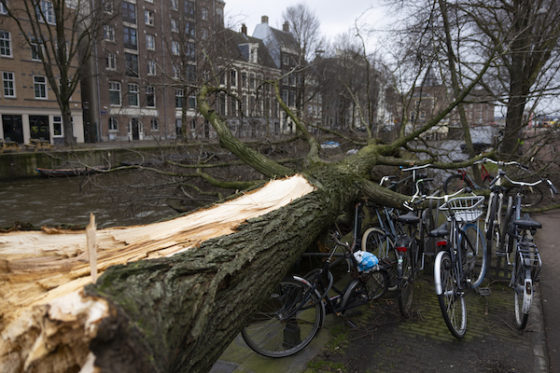 Dozens of trees were brought down in Amsterdam. Photo: Ramon van Flymen ANP

Storm Eunice tore across the Netherlands on Friday afternoon, killing three people who were all hit by falling trees in the Amsterdam area.

One person was taken to hospital with serious injuries after a tree blew down and hit them in the south of the city. The fire brigade said later the person had died.

The second deadly incident took place in Diemen, when a tree blew on to a car, killing the occupant, local broadcaster AT5 said.

In the third, a cyclist was hit by a tree on the Vrijheidslaan, also in Zuid, the fire brigade said on Twitter.

In Noord-Brabant, an elderly woman was taken to hospital with serious injuries after she was hit by a falling tree. She has several broken bones.

Elsewhere the wind damaged buildings and tore down trees. In The Hague, part of the roof of the ADO Den Haag stadium on the outskirts of the city was blown away by the storm.

Several roads were closed for a time, including part of the A9, the A16, the N11 and the A58 at the Yerseke turnoff.  The A20 from Gouda to Rotterdam was closed in both directions near Moordrecht because of falling trees.

De Oosterscheldekering sea sluice has also been closed as a precaution against high seas.

Several webcams are live streaming the storm as it happens, including Scheveningen and Zandvoort. Dutch plane spotters have also set up a webcam showing planes landing at Schiphol airport, complete with running commentary.

Intercity and international train services were canceled from 2pm, public transport in Rotterdam and The Hague halted and KLM scrapped 167 flights from Schiphol airport in preparation for the storm.

The KNMI weather bureau issued a code red weather warning for the coastal provinces and Flevoland and amber for all but Limburg. The storm will die down in the late afternoon and evening.

Eunice will be the fourth official storm of the year and the fifth this winter. To qualify as a storm, the average wind speed must be at least gale force 9 for an hour.

This story will be updated with the latest news