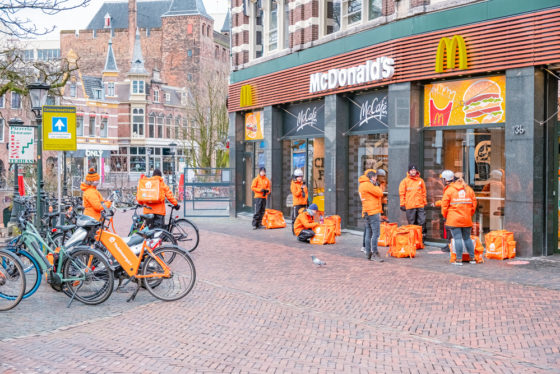 Tens of thousands of gig economy workers in the Netherlands may end up with more pay and more rights, if proposals by the European Commission become law.

Brussels is proposing reclassifying taxi drivers and food delivery couriers as employees if their work fits certain criteria. The initiative lays out a string of conditions to establish if the relationship between worker and platform company is one of employer and employee, or if the worker is truly self employed.

For example, the platforms, such as Uber and Deliveroo, would be considered employers if they set pay rates, or require uniforms and supervise the work electronically. Platforms themselves will face the burden of proof to prove there is no such relationship.

The proposal first has to be accepted by the European parliament and member states before it becomes law, and that is likely to take at least two years.

Nevertheless, MEP Agnes Jongerius, who heads up the PvdA delegation in Brussels, described the move as a ‘major advance’ for a growing group of workers in healthcare, transport, meal delivery, cleaning and other digital services who are working through platform companies.

So far, European courts have been asked to settle about 100 disputes relating to gig economy companies. In the Netherlands, for example, the FNV trade union has taken Uber, Deliveroo and cleaning company Helpling to court.

The Netherlands is also looking at bringing in legislation which would give people earning less than €30 or €35 an hour as a freelancer the right to request a proper contract, although it is unclear if this will become part of the new coalition agreement.

Caretaker social affairs minister Wouter Koolmees has already said that the way to strengthen the position of gig economy workers would be to give them an automatic right to a fixed contract.

Over 28 million people in the EU work through digital labour platforms and their number is expected to reach 43 million by 2025.

Last year, the head of Dutch food delivery company Just Eat Takeaway told the BBC in an interview that he plans to phase out gig working at the company and will instead offer delivery workers contracts and better workplace protection.