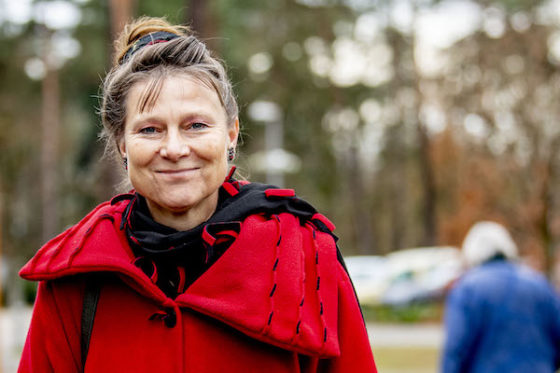 It’s been a few weeks since the end of the climate conference in Glasgow, where delegates from nearly 200 countries signed a new agreement to stop temperatures rising above 1.5 degrees. But, what does that mean for Dutch climate policy?

Marjan Minnesma, the director of climate organisation Urgenda, is optimisticabout the outcomes. ‘I could be pessimistic, and that will lead you to a dark place,’ she says, ‘but some good and necessary steps were made.’

Minnesma and Urgenda hit the headlines when they brought a case against the Dutch government in 2013 – winning it two years later in court. It was the first case in Europe that recognised the government’s duty of care towards its citizens in regard to climate change.

Since then, the Supreme Court has upheld the lower court ruling that the government must do more to reduce greenhouse gas emissions, and campaigners in other countries have opted to take a similar approach.

Minnesma highlights the positive results of Cop26, such as counties agreeing to phase down the use of fossil fuels and China and the US recognising we are in a climate crisis.


‘The wording is really important because it refers to a general consensus that we are in a crisis. This is helpful for the climate cases being brought against governments elsewhere. It has a snowball effect,’ she says.
Policy shift

The summit showed that the political tide is also turning, highlighted by the Dutch u-turn on public financing for fossil fuel projects abroad.


The initial refusal was a central theme in a 40,000 strong demonstration in Amsterdam on the first weekend of the conference – the biggest climate march that the Dutch capital had ever seen.

‘The two right-wing parties in government seem to act more on public opinion than on science. So it’s important that we keep pushing and that people keep taking too the streets,’ she says.
The Netherlands was also in the news from the summit when it proposed an initiative to phase out the use of diesel trucks and buses by 2040. This is part of a plan to tackle transport pollution, which is responsible for a third of carbon emissions worldwide. These policies nod to a shift in approach to climate policy – but are they enough?

Acceleration
‘We need to scale up climate action enormously for these goals to be met,’ Minnesma says. ‘We need to accelerate the fight against climate change.’
Last week, a draft plan for the next coalition was leaked to the Volkskrant, including  climate policies. The proposed measures included reducing Dutch carbon emissions by 55% by 2030.
These targets, says Minnesma, are not enough. ‘If we want to keep global warming to 1.5 degrees, emissions need to be halved. That’s 65% fewer emissions than in 1990, and that’s the baseline. The Netherlands needs to take a crisis approach to climate change as we do to Covid-19, not a normal Dutch approach.’
Accountability
Urgenda has no problems holding the Dutch government to account, or heading back to court if not enough progress is being made.

‘I spoke to the prime minister [Mark Rutte] twice in March,’ she says. ‘I offered him an affordable plan of how the Netherlands can use 100% sustainable energy by 2030. I told him that if he doesn’t follow this plan I might have to bring another climate case against the government in ten years.’
The Netherlands, she says, already has the means to put this in place. ‘We have all the technical solutions, the fertilisers, and the resources at hand,’ Minnesma says. Rutte, she says, was ‘enthusiastic about the plan, so I’m curious to see what the new coalition will come up with.’

Minnesma is one of thousands of people who walked to Glasgow to attend theconference, a statement which she also made for the climate talks in Paris in 2015.Many people she met while walking to Paris didn’t not know about the climate conference, but that was not the case this year.

‘Even taxi drivers in the middle of Scotland would ask ‘Are you going to Cop26?’ and offered to give us a lift. A lot has changed, even in five years.’