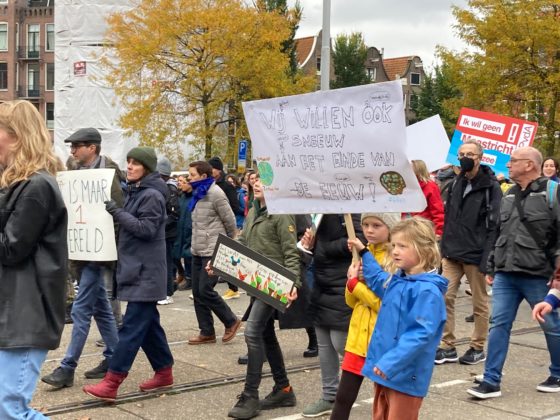 Tens of thousands of people marched through Amsterdam on Saturday calling for global action on climate change.

According to one estimate by the organisers, over 40,000 people were on the demonstration, which took over two hours to move from Dam square to Westerpark where the march ended with a rally and speeches.

The demonstration was timed to coincide with the COP26 climate talks currently underway in Glasgow. There were also demonstrations on Saturday in Denmark, Brussels, Paris and London, as well as Glasgow itself.

Many of the Dutch demonstrators’ placards and banners referred to the lack of action in the Netherlands, which did not sign a commitment to stop government investment in fossil fuel projects abroad.

Four in 10 (43%) think the government is not doing enough to combat climate change, particularly young people between 18 and 34. At the same time over half do not want to pay for climate improvement by raising taxes on products such as meat.