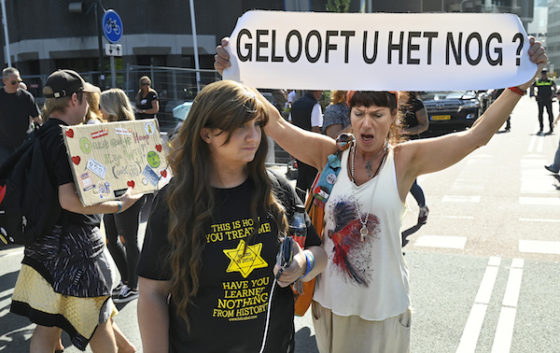 ‘World War II is not owned by a specific group,’ Baudet said in parliament during Wednesday’s debate on the budget.

Jewish organisations had asked MPs to condemn the use of the yellow stars Jews were forced to wear during WWII by anti-coronvirus vaccine campaigners. Demonstrators say the coronavirus measures mean people who refused to get vaccinated are being excluded from society in the same way as the Jews.

In his initial response earlier in the week, Baudet said on Twitter that ‘the war is not yours, it belongs to all of us’ and  put the Holocaust in quote marks. Asked about this in parliament, Baudet reiterated his earlier comments.

‘I don’t think they [the three Jewish groups] can claim the war,’ he said. The war is a ‘very interesting, very complex, question in history but it is not owned by a certain group or ethnicity’.

He also refused to apologise for putting the word Holocaust in quotation marks, saying that he was merely quoting someone else.

‘It is extremely inappropriate,’ he said. ‘Of course we are not talking about claiming World War II. We are talking about the suffering inflicted on the Jewish people. I can tell you that in my community people feel sick.’

Emile Schrijver, from the Jewish cultural centre, said Baudet is playing down the importance of the Holocaust. The comments are particularly difficult to deal with in a week in which a new monument featuring the names of all 102,000 Jews, Sinti and Roma who were killed during the war was unveiled in Amsterdam, Schrijver said.

Aron Vrieler from the Israel information centre CIDI said placing the Holocaust in quote marks and talking about ‘claiming’ is ‘exactly the same anti-Semitic dog whistles as the extreme left, extreme right and radical Islam have been doing since World War II.’

Baudet, leader of splinter party Forum voor Democratie, which has four MPs, has been accused of anti-Semitism before. In May, the party circulated a poster which linked World War II with the current anti-coronavirus measures, which partly led to the party’s disintegration.

In February, Baudet said at an election rally that the Nuremberg trials – the military tribunals in which leaders of Nazi Germany were prosecuted by the Allied forces after World War II – were illegitimate.

At the end of last year, the party became embroiled in row about anti-Semitic messages circulated by the party’s youth wing. Later, an exodus of FvD MPs, senators and local councillors  was sparked by revelations about a dinner during which Baudet expressed his support for conspiracy theories and said nearly everyone he knew was an anti-Semite.