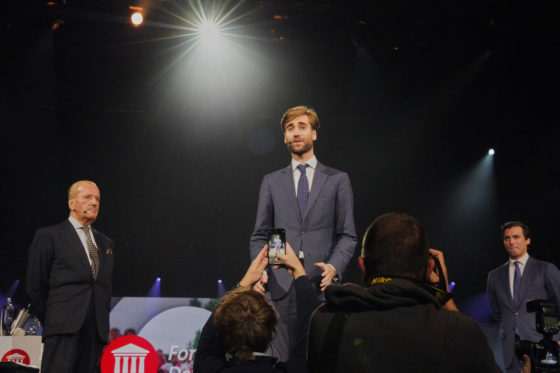 Several leading members of far-right party Forum for Democracy’s youth wing have been suspended in a long-running row over racism and anti-Semitism on internal message boards.

Party leader Thierry Baudet came under pressure from senior colleagues over the weekend to take a firmer stance on the issue after screenshots of anti-Semitic messages in Young FvD (JFvD) app groups were published in Amsterdam-based newspaper Het Parool.

FvD said an unspecified number of JFvD office bearers had been relieved of their duties. One is thought to be a 23-year-old student of political communications who was quoted saying ‘Jews have international paedophile networks and usher large numbers of women into pornography’. In another message he expressed the view that ‘National-Socialism had the best economic formula ever.’

Baudet announced an internal inquiry to be led by FvD senator Paul Cliteur and Wybren van Haga, an independent MP who joined the party last month and is on its list of candidates for next year’s general election. But the move was criticised as ‘too little, too late’ by senator and Amsterdam city councillor Annabel Nanninga, who called for a ‘total clearout’ of the JFvD organisation.

FvD MEP Rob Roos said the JFvD group should be disbanded and reconvened ‘as the Sweden Democrats did,’ referring to the Swedish right-wing nationalist party, which cut off and reformed its youth wing in 2015 over allegations of links to the fascist Nordic Youth movement.

The FvD’s troubles come at a time when its standing in the polls has taken a sharp dive as voters have been turned off by Baudet’s support for anti-lockdown activists and coronavirus conspiracy groups such as Viruswaarheid.

The latest Peilingwijzer poll of polls projects FvD would win around six seats if an election were to be held now, compared to 15 in February and 24 at the height of its popularity 18 months ago, when it took the largest vote share in the provincial elections.

Central to the current row is the position of Freek Jansen, chair of the JFvD wing, who is also Baudet’s speechwriter and one of his closest aides. NRC quoted members at the weekend saying that Baudet had threatened to quit as leader if Jansen was forced out.

Jansen, who is ranked seventh on Forum’s list of election candidates, raised eyebrows with his language in a speech to the JFvD congress in June last year. He spoke of fighting back against ‘clown world’ – a derogatory term widely used in extreme-right forums such as 4Chan – and described anti-fascists as ‘the stormtroopers of the established order.’

Jansen initially declined to comment on Het Parool’s revelations, but later issued a statement in which he said the group was ‘shocked’ by the content of the messages and promised to co-operate with the internal inquiry.

‘I want to emphasise that racist and anti-Semitic ideas have no place in our group,’ he wrote in a message posted on JFvD’s Facebook page. ‘We support FvD’s election manifesto, not the things we are now being associated with.’

The dispute first came to light in May, when the party expelled three members and suspended three others for ‘unacceptable statements’ made in online forums. Other FvD members told the party leadership they were concerned about the prevalence of ‘authoritarian, fascist and/or Nazi notions, including anti-Semitism, homophobia and racist imperialism’ within the youth movement.

However, last week it emerged that five of the whistleblowers were themselves ejected from the party in September. The leadership of JFvD said they had been sanctioned ‘not because they highlighted transgressions, but because they deliberately caused harm to the JFvD.’