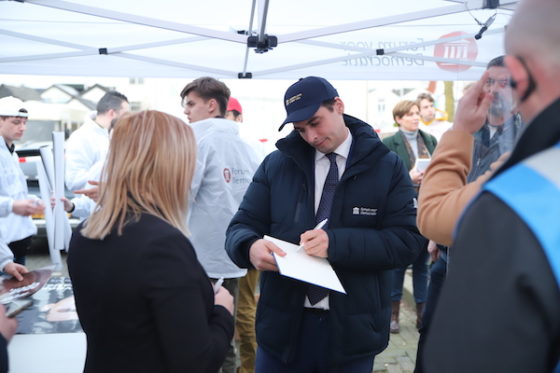 Thierry Baudet, leader of far right party Forum voor Democratie, has come in for more heavy criticism after saying that the Nuremberg trials – the military tribunals  in which leaders of Nazi Germany were prosecuted by the Allied forces after World War II – were illegitimate.

Speaking during a campaign rally in Gouda on Monday, Baudet was asked if politicians who supported the coronavirus rules should be put before a ‘sort of tribunal’. The FvD leader answered that he did not support the use of retroactive legal powers. ‘I consider the Nuremberg tribunal to also have been illegitimate,’ Baudet said.

Although criticism of the Nuremberg process is not new, commentators described Baudet’s use of them as an example of a wrongful trial as wrong and insensitive, particularly given the accusations of anti-Semitism which have dogged the party over the past months.

‘I was speechless,’ Aron Vrieler, a researcher at the Israel information centre CIDI, told the Telegraaf. ‘In describing the Nuremberg trials as illegitimate, you are legitimising the extremism which was on trial.’

Baudet’s argument that the Nazis could have faced trial under regular national laws is wrong, Vrieler said. ‘I’m really surprised a Dutch MP would say this,’ he said. ‘The trials were a first step to show where extremism and anti-Semitism had led – the Holocaust.’

The NRC said that Baudet’s campaign for the March general election was ‘full of alternative facts’ and that he was following former US president Donald Trump’s campaign tactics. Baudet has made no secret of his support for Trump in the past.

During his campaign speeches, Baudet has said the party’s poor showing in the polls ‘can’t be’ true, has described coronavirus as a hoax and a seasonal flu, and called for a ‘civilian army’ to rise up on election day.

In Tholen, on Sunday, he even evoked Trump’s ‘space force’ by calling for the Netherlands to launch its own space programme and to land on the moon, the paper said.

He has also attempted to cast doubts about the election results. During one speech Baudet said that votes – cast on paper in the Netherlands – will be ‘digitalised and put into a computer.’

This computer will ‘probably be owned by Dominion or another well-known international company that from people’s friend George Soros is,’ he said in a sarcastic voice, ‘and then you won’t know what happens to the votes.’