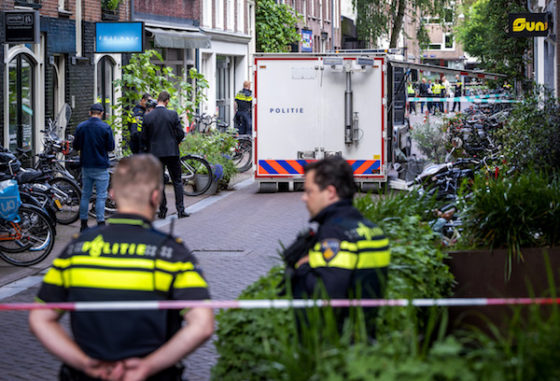 The scene of the shooting. Photo: Evert Elzinga

Television crime journalist Peter R. de Vries is in hospital fighting for his life on Tuesday evening after being shot in Amsterdam while walking back to his car after appearing on a television talk show.

Sources told DutchNews.nl that De Vries had been shot in the head. He was taken to hospital on the south side of the city.

City police chief Frank Pauw said that two people had been arrested in a car on the A4 near Leidschendam, including the possible shooter. A third person was arrested in the city itself.

Given the shooting took place close to the Leidseplein ‘we expect to have a lot of surveillance camera footage,’ a spokesman for the public prosecution department said.

Prime minister Mark Rutte said in a televised statement that the attack on De Vries was an ‘attack on a brave journalist’. The shooting, he said, is an ‘attack on free journalism which is so important for our society.’

Amsterdam mayor Femke Halsema described De Vries as a ‘national hero’ who stood up for people in need and kept investigators on their toes. The shooting was a ‘brutal, cowardly attack,’ she said.

De Vries, 64, made his name in the early 1980s writing about Amsterdam’s underworld and the kidnapping of Freddy Heineken.

De Vries later fell out with crime boss Willem Holleeder after he collaborated on a film adaptation of the kidnapping.

He is currently spokesman for a key witness in a major gangland killing trial and had been threatened. According to some reports, he had refused to have personal security.

He also was involved in several high profile cold cases.