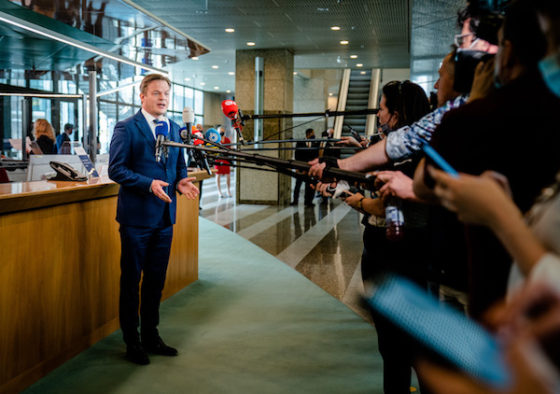 Pieter Omtzigt talking to reporters after being sworn in as an MP in March. Photo: Bart Maat ANP

Christian Democrat MP Pieter Omtzigt has resigned from the party, two days after a controversial document he wrote criticising the CDA was leaked to the media.

Omtzigt, who was one of three MPs instrumental in uncovering the full extent of the childcare benefit scandal, is currently at home with stress, but will retain his seat as an independent once he is back at work.

He said in a statement he did not know how the document first leaked to the Limburger website and that it should have remained an internal discussion document.

In the 76-page report, Omtzight says he felt undervalued and unsafe when the childcare benefit scandal was being investigated and says the party’s most recent problems are part of wider structural issues.

The fact that his criticism of the party is now out in the open has made it more difficult to continue to function, he said on Saturday. ‘That is why, with pain in my heart, I have told party chairman Marnix van Rij that I am cancelling my CDA membership,’ Omtzigt said in a short statement.

Omzigt, 47, contested the party leadership last year but was narrowly beaten by Hugo de Jonge. De Jonge later stepped down because of the pressure of dealing with coronavirus and Wopke Hoekstra, the finance minister, was then given the role of leading the party into the election campaign.

In the event, the CDA lost four seats in the election, and now has 15 MPs. Omtzigt, who was number two on the party list, gathered 340,000 preference votes  – enough to win five seats in his own right. He has been an MP for the CDA since 2003.

Hoekstra and Van Rij said on Saturday in a joint statement they were shocked and disappointed by Omtzigt’s position.

‘We have no choice but to respect his decision, but we had hoped for an different outcome,’ they said.