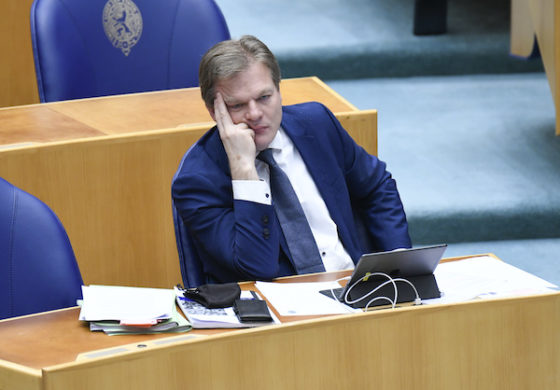 Christian Democrat MP Pieter Omtzigt, currently off sick with stress following his work on the childcare benefit scandal and an abortive attempt to become party leader, has ‘placed a bomb under the CDA’ in a 76 page document which has been leaked to the media.

In the document, Omtzigt says he felt undervalued and unsafe when the childcare benefit scandal was being investigated and says the party’s most recent problems are part of wider structural issues.

The document includes parts of internal party files and screenshots of communications between party workers and members. In those documents, Omtzigt says he was described as a psychopath, a sick man and a moron, and was directly accused of sabotaging the campaign to find a new leader.

Omtzigt was a candidate for the leadership role alongside health minister Hugo de Jonge and junior economic affairs minister Mona Keijzer. De Jonge went on to beat Omtzigt by a narrow margin but stood down shortly afterwards, citing the pressure of dealing with the coronavirus pandemic. Finance minister Wopke Hoekstra then took over the role which, Omtzigt says, was not in line with agreements which had been made.

The document also goes into Omtzigt’s doubts about party financing, and raised the issue of three major sponsors who contributed a combined €1m to the CDA’s campaign budget.

‘These sponsors and someone from the campaign team have an interest in attempts to change the CDA’s plans… such as the election manifesto,’ Omtzigt said. ‘I have a problem with this, and it makes the CDA vulnerable.’

It is unclear who the sponsors are, but their names were not included in the official register, Omtzigt said.

Interim party chairman Marnix van Rij said in an initial reaction that he ‘categorically’ dismissed the suggestion that the support of sponsors with a lot of money had influenced the manifesto.

Omtzigt has not so far reacted to the leaked document, which was first obtained by local paper De Limburger. The document was written for a party committee which is looking into the leadership battle.

However, Hoekstra told reporters ahead of Friday’s cabinet meeting that the document is ‘extremely annoying and damaging’ and that he first wanted to discuss the implications internally.

RTL correspondent Frits Wester said the document, which he described as ‘a mixture of political and personal frustrations’ is extremely damaging to the CDA.

‘It makes things extremely difficult for CDA leader Wopke Hoekstra and complicates the position of the CDA in the formation process,’ Wester said. ‘In the eyes of the other parties, the CDA will first have to put its own house in order, before the party can begin dealing with the nation’s interests.’

The Financieele Dagblad described Omtzigt’s memo as a ‘bomb under the party’.

Omtzigt’s role in uncovering the child benefit scandal did not win him any friends within the coalition government, which eventually resigned two months ahead of the general election.

He also indirectly disrupted early coalition formation talks after it emerged that finding a new job for him had been mooted during the negotiations.