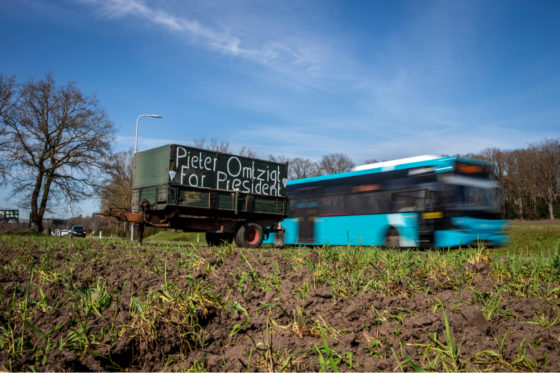 A farmer in the Achterhoek expresses his support for MP Pieter Omtzigt. Photo: ANP/HH/Vincent Jannink

The new Dutch parliament will hit the ground running on Wednesday with a debate on the abandonment of last week’s preliminary coalition talks after parliamentary scout Kajsa Ollongren accidentally leaked a damning memo.

Ollongren exposed the briefing note as she dashed from the parliament building early on Friday morning after testing positive for coronavirus. It suggested the position of Christian Democrat MP Pieter Omtzigt was due to be discussed at a later meeting with caretaker prime minister Mark Rutte and D66 leader Sigrid Kaag.

Ollongren, a D66 politician who served as home affairs minister in Rutte’s last cabinet, and her fellow negotiator, Annemarie Jorritsma of the VVD, resigned shortly after the contents of the memo were made public. On Monday they issued a statement saying they took full responsibility for the notes.

Rutte initially said the memo would not be debated in parliament because the talks were starting again from scratch, but he later backed down.

Ollongren is able to attend the debate on Wednesday afternoon following a negative coronavirus test earlier in the day.

The debate is likely to focus on the question of who raised the issue of Omtzigt’s role during the first round of exploratory talks. Rutte and Kaag have both said they did not discuss it, while Ollongren and Jorritsma said the topic did not originate with any of the party leaders or the media, without explaining how it came to be included in the memo.

Omtzigt, the popular and combative backbencher who played a key role in exposing the tax office’s mistreatment of families suspected of child benefit fraud, which brought down Rutte’s last cabinet, is currently recovering from overwork. He will go to parliament for the swearing-in ceremony on Wednesday but will not take part in the debate.

An opinion poll at the weekend by Maurice de Hond suggested he could win 23 seats if he broke away from the CDA to start his own party – putting him ahead of D66 and Geert Wilders’s PVV – while the CDA would lose five of its 14 MPs.

Omtzigt told reporters ahead of the debate that he hoped it would become clear who had written the text about another job. ‘This memo was not written, someone actually wrote it,’ he said. ‘There is no phantom typewriter around.’

The memo, he said, is an affront to the Dutch voter.