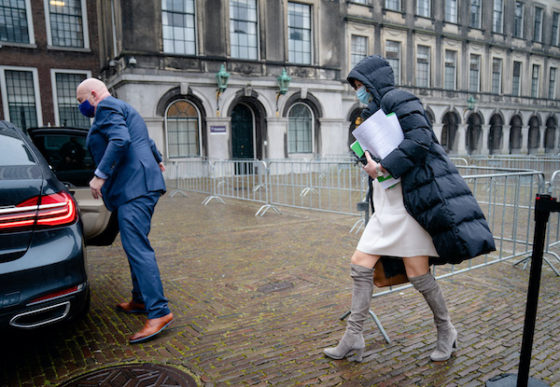 The two people charged with kick-starting the coalition negotiations have resigned after one – D66 home affairs minister Kajsa Ollongren – accidentally leaked her private notes to reporters as she left parliament on Thursday.

Ollongren and Annemarie Jorritsma, who is leading the talks on behalf of the VVD, were due to meet prime minister Mark Rutte and D66 leader Sigrid Kaag on Thursday morning to brief them on their findings so far.

However, the talks were abruptly halted when Ollongren learned she had tested positive for coronavirus and left immediately. Eagle-eyed reporters spotted that her notes were visible under her arm in an ANP photograph.

When the picture was magnified the words ‘position Omtzigt… job elsewhere’ could be clearly read. This is a reference to the popular Christian Democrat MP Pieter Omtzigt who has been highly critical of the outgoing coalition, particularly its role in the tax office scandal.

The document also states that ‘left wing parties are not completely stuck together’ – possibly referring to suggestions that Labour (PvdA) could be invited to join a new cabinet. Labour leader Lilianne Ploumen has said publicly she does not want Labour to be the only left-wing party in the coalition.

The paper also states that majority support in the upper house of parliament, or senate is not a must for anyone, and questions the negotiating style of CDA leader Wopke Hoesktra and his future cabinet role.

Hoekstra responded to the leaks on Twitter, describing them as ‘bizarre’.

In particular the reference to Omtzigt, currently home due to overwork, has aroused political hackles, with MPs from across the political spectrum calling for an explanation.

In their resignation statement, Ollongren and Jorritsma said that the notes were meant as input for the next round of talks and did not reflect the discussions which had already been held.

Medical care minister Tamara van Ark (VVD) and social affairs minister Wouter Koolmees (D66) are taking over as scouts of behalf of the two parties, which emerged as the biggest in last week’s general election.