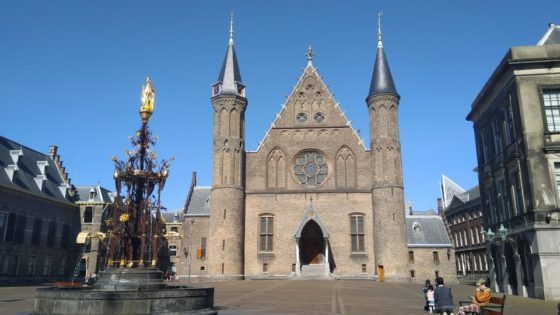 Talks at the Binnenhof will resume this week. Photo: DutchNews.nl

Former parliamentary scouts Kajsa Ollongren and Annemarie Jorritsma have said they take full responsibility for the leaked notes which led to them stepping down and causing the coalition talks to be abandoned.

Ollongren was photographed as she dashed out of the meeting on Friday morning after testing positive for coronavirus. In her haste she exposed the notes for her meeting, which included the comment: ‘Omtzigt’s position: role elsewhere’, referring to the popular Christian Democrat (CDA) backbencher.

The notes also said the ‘negotiating style’ of CDA leader Wopke Hoekstra should be discussed in a follow-up meeting with caretaker prime minister Mark Rutte and D66 leader Sigrid Kaag, whose parties are expected to form the backbone of the new coalition.

After Hoekstra, Rutte and Kaag all denied over the weekend that they had raised the question of Omtzigt’s position during the exploratory talks last week, the two scouts suggested that the note referred to media reports.

In a letter to parliamentary chair Khadija Arib on Monday, Ollongren, appointed on behalf of D66, and Jorritsma of the VVD described the events of the last few days as ‘very inappropriate’ and expressed their regret for them.

‘Only two people are responsible for the existence and the contents of the memo, and that is us, the signatories of this letter,’ they wrote.

‘Neither are the media indirectly responsible for the words “role elsewhere” regarding Mr Omtzigt – we are happy to retract this inadvertent suggestion.’

The memo is expected to be debated in parliament at a later date, once Ollongren is able to emerge from quarantine. The talks will recommence this week with two new scouts – Wouter Koolmees of D66 and the VVD’s Tamara van Ark, both members of Rutte’s last cabinet.