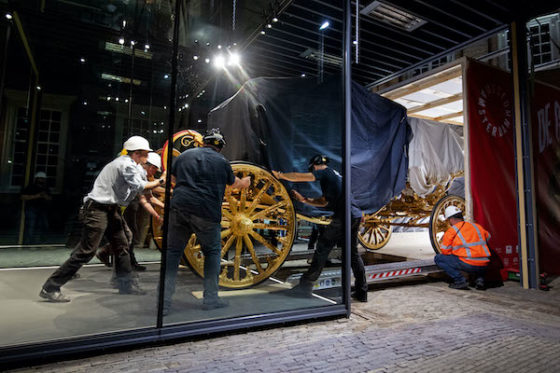 The king’s golden coach has arrived in Amsterdam for a special exhibition exploring years of controversy surrounding this gift from the city of Amsterdam to the Netherlands’ royal family.

The coach, which has undergone a five year restoration project and weighs 2,500 kilos, was lifted in to the central courtyard at the Amsterdam Museum on Wednesday night, where it will be kept in a glass case for some eight months.

The show, Golden Coach, will open at the Amsterdam Museum on June 18 and run until February 27 next year. It aims to introduce the audience to different perspectives on the ceremonial vehicle, from socialist views that it was a costly and unnecessary gift for queen Wilhelmina on her inauguration in 1898, to the stories behind its unique craftsmanship.

In the last decade, the horse-drawn coach traditionally used for formal occasions such as budget day has repeatedly come under fire for a painted panel which depicts scenes of colonialism.

It has been out of use for five years during a period of renovation and it is unclear whether its future will now only be as a museum exhibit, due to a wider debate about the Dutch role in slavery and depictions of the so-called Golden Age.

Judikje Kiers, director of the Amsterdam Museum, said that this exhibition will link the history of the golden coach with both praise and criticisms, throughout time. ‘This is the first time after a long period of restoration it will be shown to the public,’ she said in a press conference last month.

‘That’s very special because people from Amsterdam over 100 years ago paid for the coach as a present to queen Wilhelmina. It’s a very special object that connects history and all the debates and discussions in our country and the world on this period.’