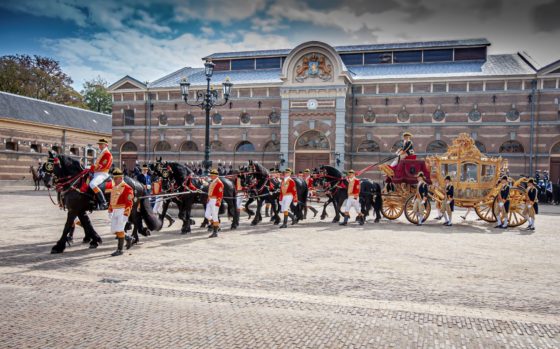 A new exhibition on the Dutch king’s golden coach will explore years of controversy surrounding this gift from the city of Amsterdam to the Netherlands’ royal family.

The show, Golden Coach, will open at the Amsterdam Museum on June 18 and run until February 27 next year. It aims to introduce the audience to different perspectives on the ceremonial vehicle, from socialist views that it was a costly and unnecessary gift for queen Wilhelmina on her inauguration in 1898, to the stories behind its unique craftsmanship.

In the last decade, the horse-drawn coach traditionally used for formal occasions such as budget day has repeatedly come under fire for a painted panel which depicts scenes of colonialism. It has been out of use for five years during a period of renovation and it is unclear whether its future will now only be as a museum exhibit, due to a wider debate about the Dutch role in slavery and depictions of the so-called Golden Age.

Judikje Kiers, director of the Amsterdam Museum, said that this exhibition will link the history of the golden coach with both praise and criticisms, throughout time. ‘This is the first time after a long period of restoration it will be shown to the public,’ she said in a press conference. ‘That’s very special because people from Amsterdam over 100 years ago paid for the coach as a present to queen Wilhelmina. It’s a very special object that connects history and all the debates and discussions in our country and the world on this period.’

The coach itself will be hoisted over Amsterdam Museum’s buildings to be displayed in a glass box in a central courtyard. Then, with the help of objects from Amsterdam Museum’s collection and new commissions from contemporary artists, the exhibition will tell the story of how it was conceived and crowd funded via door-to-door collections in 19th century Amsterdam, for the first female queen of the Netherlands.

Although criticised by some as an unnecessary gift for a family with 150 coaches already, and using the unpaid embroidery skills of girls in the City Orphanage of Amsterdam, the coach was also a display of extraordinary craftsmanship: a thin layer of gold leaf, teak wood from Java, and paintings by artist Nicolaas van der Waay, including the controversial ‘Tribute from the Colonies.’ 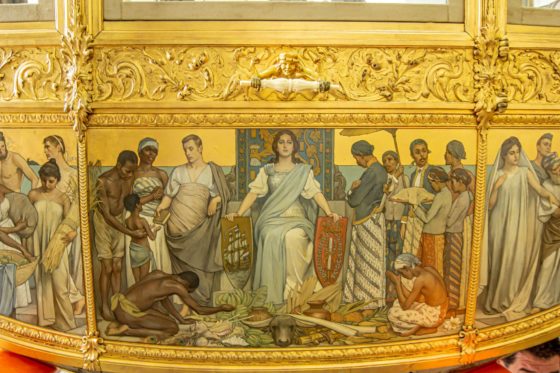 The exhibition puts the coach into the context of 19th century views of the Netherlands’ empire, which then included 40 million people in the ‘Dutch East Indies’ and some half a million people in Suriname and the islands of the Caribbean. Several years earlier, for instance, real people were put on display by the Dutch during the 1883 World Fair, whose organisers aimed ‘to show the colonial wilds to the modern, civilised public in Amsterdam’.

‘The narrative of that world exhibition in 1883 was how the Dutch brought modernity,’ said curator Maria Rey-Lamslag. ‘They also exhibited people from the colonies, from Suriname and Indonesia, in a human zoo.

‘That idea of the colonies within the kingdom at that time reached more than a million people who visited the exhibition and probably influenced the people who built the golden coach.’

The exhibition is intended to be part of a reassessment of all aspects of Dutch history, said artistic director Margriet Schavemaker. ‘Why has it taken so long to address these things?’ she said. ‘For the Netherlands, I can only say that we are a country [with] a national identity based on the idea that we are very tolerant, very open, always for unity and polyphonic by heart. But at the same time, this means that we do not want to acknowledge that there is racism and structural inequities.

‘For the Dutch, it hurts to acknowledge that Black Pete is a racist tradition, although it is also a children’s festival: if a lot of people in the country are hurt by certain traditions or words, we need to change.’

She added: ‘I hope that with this show that we prove that a piece of contested heritage, the biggest in the Netherlands, will not cause greater polarisation but can be placed where people can come closer to each other and have a dialogue.’