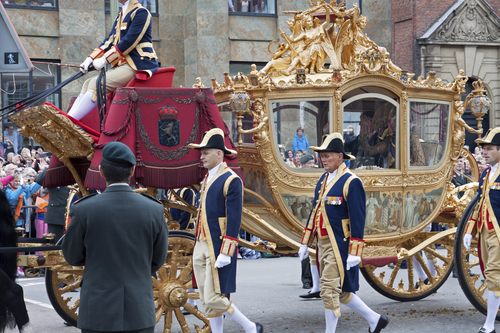 The Dutch royal family’s 19th century golden coach, used for ceremonial occasions such as budget day, has again come under fire for its ‘colonial’ painted decoration.

Dr Karwan Fatah-Black, a history lecturer at the university of Leiden, reportedly told RTL Nieuws that the coach belongs in a museum rather than being renovated for public celebrations once more.

The king’s coach has come under fire because of its painted panel where people of Indian and African origin are pictured bowing to a white woman on a throne.

‘The coach clearly refers to colonial submission, with the Indians and people of African descent bringing traded goods to the white woman,’ Fatah-Black reportedly said. ‘Actually, the image is saying: “white comes above everything else and black is there to serve us.” The panel shows that at the time people were proud of colonial rule and gloried that the Netherlands had a global empire.’

More than 5,000 people have signed a petition to put the golden coach in a future museum of slavery, once its €1.2m renovation is complete.

Meanwhile, in Rotterdam activists calling themselves Helden van Nooit (heroes of never) have vandalised a statue of 17th century naval officer Piet Hein who led the plunder of the Spanish silver fleet in 1628 and had a key role in establishing colonies in Brazil.

They have also attacked arts quarter building in Rotterdam for its links with ‘colonial violence’. The Witte de With Center for Contemporary Art is named after a vice-admiral in the Dutch navy who played a pivotal role in several major sea battles, but also laid waste to the city of Jakarta in 1618. 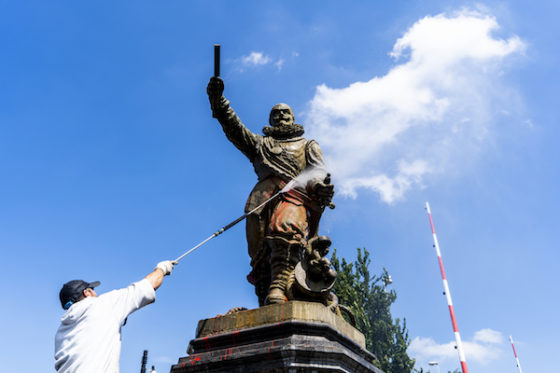 The statue of Piet Hein being cleaned on Friday. Photo: Desiree Schippers HH

Culture minister Ingrid van Engelshoven has described the vandalism as ‘extremely regrettable’. She said that she does not favour removing statues, as as happened in other countries, because ‘it will not help take the discussion forward’, broadcaster NOS reported.

The Dutch debate has been fired up by international protests against racism following the alleged murder of black American George Floyd by a white police officer in Minneapolis. Prime minister Mark Rutte has predicted that soon there will be no more Zwarte Piets blacking up for Sinterklaas, and more councils have announced they are scrapping the Dutch blackface practice.

The Amsterdam Museum has recently re-labelled works from ‘the Golden Age’ as simply the 17th century to represent other sides of the era such as poverty, war, forced labour and slavery.

Putting the spotlight on the Dutch colonial past

However, Wim Pijbes, former director of the Rijksmuseum in Amsterdam  – which started revising racist artwork titles in 2015 – told the Parool that history should be looked at with nuance. ‘You can’t change history – only the way in which you deal with history,’ he reportedly said. ‘I understand where the anger and emotion are coming from and it is good to have this debate, but you don’t solve racism by tearing images from their pedestals.’

The secretariat for the Dutch royal family confirmed that the golden coach is currently being restored, with no known end date for the work. When asked to comment on concerns about whether the images on the coach fit with modern times, it added: ‘We have no response.’