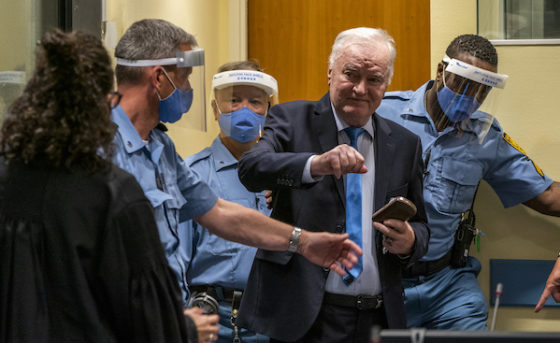 Ratko Mladic prior to the pronouncement of the verdict. Photo: Jerry Lampen ANP

A UN tribunal has upheld the conviction of Ratko Mladic, exhausting all possible appeals for the man known as ‘The Butcher of Bosnia’ for his role in the massacre of Srebrenica.

‘Mr Mladic has failed to demonstrate that the trial chamber has committed any error,’ the presiding judge said, via a poor quality video connection.

The former Bosnian Serb leader was convicted by The Hague based International
Criminal Tribunal for the former Yugoslavia in 2017 on 10 counts of war crimes and genocide for his role in the Srebrenica massacre and the Siege of Sarajevo. He was sentenced to life in prison.

He appealed his conviction, arguing he wasn’t responsible for his troops and the massacre wasn’t genocide. The judges were unconvinced and upheld his conviction and life sentence. It’s not yet clear where the 79-year old will serve his term.

Mladic was chief of the army of Republika Srpska during the 1992 – 1995 Bosnian War. He was convicted of murder, torture and attacking civilians, of orchestrating the 43-month siege on the Bosnian capital Sarajevo and the killing of some 8,000 Muslim men and boys when Bosnian forces overran Dutch peacekeepers guarding the town of Srebrenica.

The massacre has been a dark point in history for the Netherlands. In total, 8,372 people, mainly Bosnian Muslims, were slaughtered by radical Bosnian Serbs in the worst massacre since World War II. Srebrenica has remained an enduring trauma for many former Dutchbat troops who maintain that the mission was ‘ill prepared’ and troops ‘were given no support.

The Dutch state was found partly liable for the death of over 300 Muslim men who were inside a Dutch military base when Mladic’s forces overtook it. That liability was later reduced by the Supreme Court.

In 2019, the Dutch cabinet acknowledged its responsibility for the massacre. ‘We would once again like to express our condolences to the relatives of the victims. The Srebrenica genocide should never be forgotten,’ said defence minister Ank Bijleveld at the time.

In 2019, former Bosnian Serb leader Radovan Karadzic was given a life sentence on appeal for his role in the massacre and other war crimes. Karadzic was first convicted of war crimes in 2016 and given a 40-year sentence.