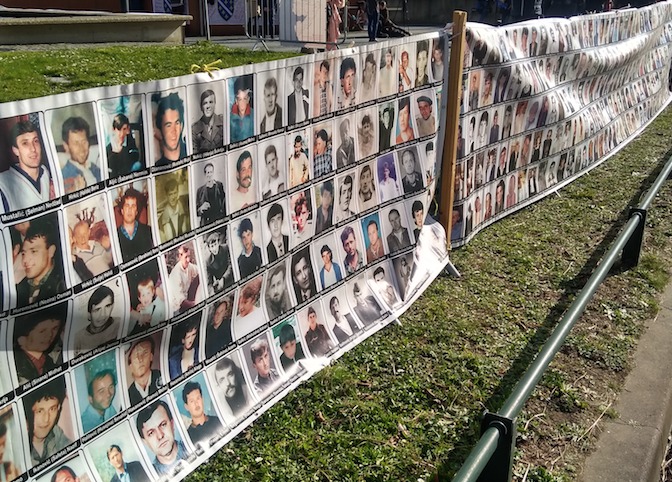 Photos of victims in front of the court earlier this year. Photo: Molly Quell

Dutch soldiers were wrong to send 350 men and boys out of the Dutch military compound near Srebrenica in 1995 but the Dutch state is just 10% responsible for their deaths at the hands of Bosnian Serbs, the Dutch supreme court said on Friday.

The ruling is the latest in a string of legal procedures by relatives of the 8,000 men who died during the massacre and who were under the protection of Dutch forces at the time.

The Dutch soldiers knew there was a real risk the men could face violence and death if they were expelled and should have offered them the chance to stay within the compound, the court said.

‘The chance that the men could stay out of Bosnian Serb hands, if that opportunity had been offered to them, was small but not negligible,’ the court said in its ruling. ‘The likelihood is put at 10% and therefore the Dutch state’s liability for the damage to relatives is 10%.’

In 2017, the appeal court said the Dutch state was 30% liable for the death of the men who had been in the compound but not for the death of the thousands of others outside. In February this year, the supreme court’s advocate general described that ruling as incomprehensible.

In total some 8,000 men and boys were killed in the Srebrenica massacre and some 6,000 surviving relatives have been involved in suing the Dutch state following the death of their menfolk.

The Dutch soldiers in Srebrenica were part of a UN peacekeeping mission and had been charged with protecting the Muslim enclave. After it was overrun by Ratko Mladic’s forces, an agreement was made on evacuating the some 30,000 Muslims who had fled to the area.

The decision to organise the evacuation was taken in a war situation, under great pressure and the threat of armed violence, the advocate general said on Friday. It was wrong to assume that the soldiers should have been aware the men who were evacuated were being murdered and that there were major risks to a longer stay in the compound, Vlas said.

In 2016, former Bosnian Serb leader Radovan Karadzic was jailed for 40 years for his role in the massacre at Srebrenica and other crimes during the Yugoslavian civil war. Ratko Mladic was sentenced to life in prison for genocide and crimes against humanity in 2017.