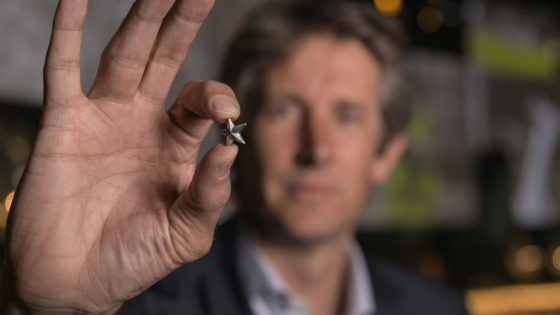 Edwin van der Sar with one of the starts. Photo: Ajax.nl

Eredivisie champions Ajax have given 42,000 season ticket holders a star made out of this year’s league trophy as a token of appreciation.

The club had the tin trophy melted down because it wanted to give fans ‘a piece of Ajax’ to make up for the games they had to miss during the coronavirus crisis.

Literally. For you. 🎖#XXXV pic.twitter.com/Bllbh9M4tA

‘We have had to play without our fans being present for much of the season,’ club CEO Edwin van der Sar said. ‘But our players felt their support all the same.’

The star is a tangible memento of this season and a unique way of being part of the championship, Van der Sar said.

Martijn van Zon, whose metalworking company De Tingieterij has made the trophy since 1985, said he’d never seen anything like it but was happy to cooperate. ‘Each of the stars contains 0.06 gram of the trophy,’ he told the broadcaster.

The club was involved in another ‘spontaneous gesture’ towards fans which turned out less well.

The players and Van der Sar gathered on a balcony overlooking the square to show off the trophy after clinching the championship to a crowd of 12,000 fans who had gathered in defiance of social distancing rules.

Some 15 were arrested for for carrying fireworks and weapons and an Associated Press photographer was attacked by club supporters.