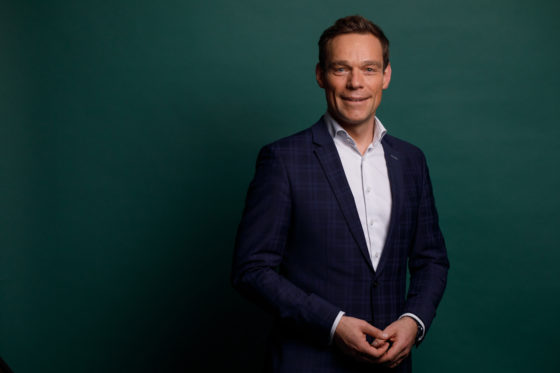 Ahead of the March general election, DutchNews.nl is interviewing a number of prominent MPs about their party’s policies. Today, Gordon Darroch talks to CDA MP Martijn van Helvert.

Compromise is the essence of politics and Martijn van Helvert believes it’s time to make it fashionable again. After a decade in which the strident populist right has tended to set the tone, both domestically and internationally, the Christian Democrats’ foreign affairs and defence spokesman says the fulcrum has shifted back towards the centre.

Having tacked to the nationalist right under its former leader, Sybrand Buma, focusing on mass migration and the fears of ‘concerned citizens’, the CDA is looking to reassert itself as the party of moderate conservatism.

‘In these uncertain times, with the coronavirus pandemic, a lot of people are drawn to radical viewpoints on the left or right, and I can understand it,’ Van Helvert says. ‘But on the other hand there is a greater need than ever for nuance. You can stand alone and make all kinds of demands, but the Netherlands is a democracy and ultimately we need to work together.

‘It might not sound so sexy round the drinks table, but people are aware of it when they go into the voting booth. There’s a big demand for unifying parties in the centre, and for that reason I suspect the CDA could well become the biggest party at these elections.’

As the 25th placed candidate on the CDA’s list, Van Helvert, 42, needs a strong showing either for his party or himself to return to parliament. He became an MP in November 2014, having narrowly missed out at the election two years earlier when he was overtaken on preference votes by Pieter Omtzigt.

Van Helvert has built up a solid base in his native Limburg, where he was previously a member of the provincial assembly. He made a short-lived pitch for his party’s leadership last June, running under the slogan Wat ons bindt (‘what unites us’), but withdrew six days later after scoring zero in a poll for EenVandaag.

For this month’s election he has launched a personal campaign to secure 25,000 preference votes, which he believes will be enough to return to parliament even if, as current polls suggest, the CDA wins around 20 seats. ‘I was elected with 19,000 preference votes in 2017, which is nice, because it gives you a direct contract with the voters rather than with the party,’ he says. ‘You’re there because people think you should be doing the job.’

Van Helvert takes a pragmatic view of foreign affairs, on the one hand seeking to strengthen relationships within organisations such as Nato and the European Union, but not being shy to engage Europe’s economic clout where diplomacy falls short. He has called for the EU to use the Nordstream 2 gas pipeline to force Russia to co-operate on a range of issues from the MH17 trial to the poisoning of opposition leader Aleksandr Navalny. The arrest of Navalny on his return from treatment in Germany prompted the US and EU to impose new sanctions on Russian individuals and businesses this week.

‘We want a good relationship with Russia, but our attempts to engage them in dialogue aren’t working,’ Van Helvert says. ‘Russia’s economy is going terribly, so if there is one area where we can touch Putin it’s financially. There comes a point where we should at least be threatening economic sanctions, and Nordstream is one possibility.’

As chairman of the USA inter-parliamentary contact group, Van Helvert saw how Donald Trump’s confrontational leadership style made dialogue more difficult even between allies: ‘The US has long said that the Netherlands needs to spend more on defence, but when Obama got off a plane he’d smile and wave, then come to the table and say, by the way, Netherlands, you need to pay more.

‘Trump would come straight off the plane and say: you’re not paying enough. Biden also thinks we should spend more on defence and I have to say, Obama, Trump and Biden are absolutely right. But Biden chooses dialogue instead of coercion.’

Van Helvert has also been working to raise awareness of one of the world’s forgotten conflicts in the Tigray region of Ethiopia, where three months of war between Ethiopian and Eritrean forces have brought the area to the brink of famine. Regional leaders and international observers have reported massacres and acts of genocide, particularly by Eritrean troops, but Ethiopia has stalled efforts to provide humanitarian relief.

‘Almost nothing is happening at the moment,’ says Van Helvert. ‘We need to build support within the European Union to demand that Ethiopia allows immediate access for humanitarian aid, which is the most important thing because a large proportion of the population are severely hungry and one stage short of a famine.’

Though the coronavirus pandemic currently dominates the world’s field of vision, Dutch voters should not be blind to the consequences of unrest in other parts of the word, says Van Helvert. ‘The more peace and stability there is in the world, the better the Netherlands’ trade position, which is why we have a responsibility to help create peace and security where it doesn’t exist.

‘Aside from the fact that you want to do something for your fellow humans, we should be telling the fringe right, who are only concerned with self-interest, that if we don’t stop the violence as part of a UN force or whatever, there’ll come a point when people start fleeing to the Netherlands. So you can argue from that point of view that there’s a reason for the Netherlands to get involved.’

The CDA supports stricter rules on immigration and asylum, including making it a criminal offence for failed asylum applicants to stay in the Netherlands, but Van Helvert argues this is consistent with a humanitarian approach. His party wants to update international refugee treaties so countries are obliged to take back citizens who have been refused asylum.

‘The procedure needs to be easier and clearer, otherwise people stay so long that they become integrated and that leads to harrowing scenes if they then have to leave,’ Van Helvert says. ‘At the same time, we need to ensure conflicts are resolved so there is no need for all these people to come to Europe. We shouldn’t wait until people are standing at our gates. Tigray is an example of that.’

The pandemic has also obscured the discontent in the Dutch agricultural community over the requirement to cut emissions of nitrogen oxides and ammonia. It was only a year ago that Farmers Defence Force (FDF) organised mass protests in The Hague and convoys of tractors picketed provincial assembly houses. The CDA pulled out of the coalition in Noord-Brabant, which has the biggest livestock sector of any province, in November 2019 over its nitrogen policy and joined a new coalition with Forum voor Democratie, the far-right party led by Thierry Baudet.

The Christian Democrats have traditionally been strong in rural communities, but the nitrogen protests dented their support as populist rivals such as Baudet and Geert Wilders aligned themselves with FDF and gave speeches from the bonnets of tractors. As with the pandemic, the sense of crisis encouraged people to seek solace in radical alternatives, says Van Helvert.

‘No other sector is as tied down by rules as agriculture, so I can understand why farmers are angry. Some farmers have gone over to the VVD or Forum, but all the polls say the CDA’s Jaco Geurts is the best spokesman on agriculture and if you ask farmers which party has helped them most, it’s the CDA.’

While D66 and GroenLinks want the Dutch livestock sector to be drastically reduced, Van Helvert argues Dutch farmers should not be penalised for their success. He has spoken to ambassadors in countries from Armenia to Suriname about relocating production to countries with lower nitrogen levels in the atmosphere.

‘We have expertise in farming which they need and they don’t have the nitrogen issue that we have,’ he says. ‘So instead of halving the cattle herd, why don’t we help our farmers expand their business and move part of the production elsewhere?’

Although CDA leader Wopke Hoekstra has apparently ruled out including Forum in a coalition, Van Helvert stands by his pledge in the summer that parties should not exclude each other before the voters have decided. ‘Forum has said the CDA wants to destroy Dutch society, so I take it they don’t want to go into government with us, but I don’t rule anyone out. We’ve have a lot of disputes with D66, for example, about community values, but despite that I’ve worked with D66 for the past four years.’

The pandemic has reminded us that the government’s first priority should be to provide for people’s basic needs, such as health and security, says Van Helvert. ‘We stand for the middle ground and we say that healthcare, police, education and defence should be well run.

‘Those are the basic functions of government and we should be prepared to invest in them. We’re not a party that promises people that their spending capacity will go up by 0.1% or 0.2%. If there’s one thing we’ve learned from coronavirus, it’s that happiness isn’t just about money.’