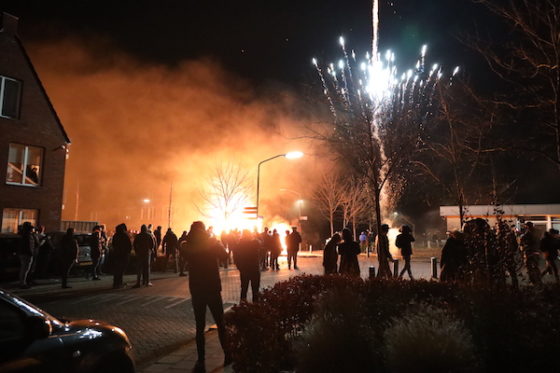 Fires were started in Veen for the third night in a row. Photo: Erik Haverhals ANP

Police intervened to close down illegal gatherings at a string of locations across the country this weekend, as people broke the rule allowing no more than two adults to come together outside.

In Veen, in Brabant, groups of youngsters again set cars on fire and lit fireworks in the third night of disturbances in a row.

The gathering took place despite warnings from the local mayor, who urged people to ‘be sensible’ and avoid police intervention.

In Uddel in Gelderland, one police officer drew his gun as the atmosphere became tense during attempts to break up a dance party of some 20 people. Two people, including the organiser, were arrested.

Around 100 party-goers were found celebrating at company premises in Oude Noorden in Rotterdam. No-one was arrested but police confiscated the sound system and bar supplies, the AD reported.

The organisers had closed off windows so that no-one could see that a party was underway, the paper said.

In Haastrecht near Gouda, police broke up another party on company premises attended by around 20 people, complete with music, light show and a bar. And a ‘rave’ was also ended in woods on the Limburg German border.

In addition, police were called to what was first described as a party under a viaduct on the A28 highway in the staunchly Protestant village of Staphorst.

However, a police spokesman said later that the group of youngsters, said to number around 100 by broadcaster NOS, were trying to provoke a response from the police by setting off fireworks and starting fires.

Despite the size of the group, the police did not intervene and the youths dispersed at around 2.30am, the AD said.