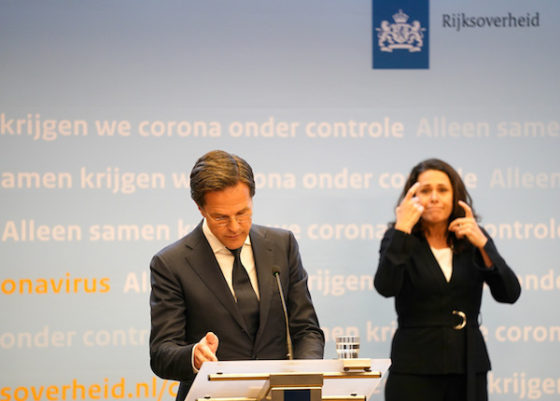 The Netherlands will start reopening primary schools and daycare centres from May 11 but organised events remain banned until September 1, prime minister Mark Rutte told a news conference on Tuesday evening.

‘This is the maximum we can do at the moment,’ Rutte told reporters. In particular, relaxing the social distancing rules too quickly will lead to a second wave of infections which needs to be averted. ‘These are difficult considerations but it’s a question of better safe than sorry,’ Rutte said. ‘We have to be very cautious.’

The decision to reopen schools is based on a wide range of research which shows that young children are unlikely to pass on the virus or develop serious symptoms themselves, according to Jaap van Dissel, head of the public health institute RIVM.

‘There are no clusters in which schools would appear to be a hot spot,’ Van Dissel said. ‘And the closure of the schools has had no impact on the spread.’ Teachers will have the right to be tested for the virus if they have symptoms.

Young children will also be allowed to resume taking parts in team sports, but without formal matches which pose a bigger risk of spreading the virus. The under-18s may also take part in team sport training again, provided they keep to the 1.5 metre rule.

‘But this means no parents watching, and showering at home,’ Rutte said. In addition, he said, officials will look at the options to make sure youngsters who are not members of a club can also join in organised sports.

The ban on events is being extended from June 1 to September 1, because ‘we can’t cope with the risks,’ Rutte said. ‘This means no professional football until September 1,’ the prime minister said. ‘We cannot avoid having to make this sacrifice.’

The Dutch football association KNVB had hoped to resume training next month in preparation for completing the season before the beginning of August.

Visits to nursing homes remain banned because of the risk to the most vulnerable people in society, Rutte said, adding that experts have been asked to look into the options for relaxing this rule.

In addition, more research is also being carried out into the use of face masks and gloves in professions which involve physical contact, but in the meantime hairdressers, manicurists and physiotherapists cannot do their jobs, the prime minister said.

Rutte stressed that the main rules – working home and staying home as much as possible, as well as maintaining a 1.5 metre distance from others – remain paramount.

‘These basic rules have brought us to where we are today,’ he said. ‘This is a virus. The only thing we really know is that the 1.5 metre rule reduces the risk of Covid-19 spreading.’

The basic social distancing rules will be extended until May 20 and in the week prior to that, ministers will decide if they need to be extended further. ‘And we will keep a close eye on developments and remain alert,’ Rutte said.

Beating coronavirus is all about working together, the prime minister said. ‘The freedom of one person cannot be at the expense of the health of another.’

Asked if people could safely book summer holidays, Rutte said: ‘Personally, I have cancelled a few things and am booking nothing. It is up to individuals themselves. But we cannot see more than three weeks ahead.’