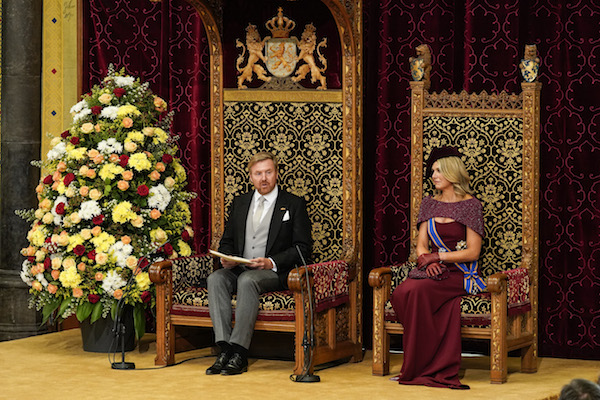 King Willem-Alexander outlined the government’s plans for the coming years at the official opening of the new parliamentary year on Tuesday.

In his seventh speech from the throne, the king said that the country is entering a period of ‘modest’ economic growth.

‘Our internationally oriented economy is vulnerable to turbulence on the global market, not least as a consequence of trade conflicts,’ the king said. ‘What is more, the prospect of Brexit casts a long shadow.’

‘This means a ‘profit warning’ is in order, both for the short and the long term, requiring us to think about how the Netherlands will earn its living in the future and remain a country with good public services.’

The ending of World War II was a common theme throughout the speech. ‘Of course, as we start to celebrate 75 years since our liberation, we are all the more aware of the degree to which prosperity and well-being in the Netherlands depend on what happens in the rest of the world,’ the king said.

And those who look at developments elsewhere in the world, will realise how special it is to live in a country where people feel safe, the king continued.

Key to the cabinet’s plans this year are to give people security in terms of work and a decent income, the king said. The recent pension and climate agreements are part of the process of making the economy ready for the future, in the way that the Afsluitdijk dyke and the Delta Works flood defences did years ago.

The king also turned to the ‘old and cherished partnerships’ with the United States and the United Kingdom which, he said, are being redefined. ‘Global free trade is under threat from protectionism and trade conflicts. The Netherlands and Europe must respond with self-assurance and realism.’

While transatlantic cooperation and the European Union are the cornerstones of Dutch foreign policy ‘many aspects of the post-war multilateral system are in urgent need of modernisation’, the king said. ‘Examples include international protection of intellectual copyright, cybersecurity and the effectiveness of decision-making at the UN and the World Trade Organisation.’

Key to the Dutch position, he said, are security, a strong and sustainable European economy, a common climate policy, respect for the rule of law, and last but not least, an effective policy on migration.

‘It is true that the number of migrants coming to Europe has fallen dramatically compared with 2015. But the sustained pressure on Europe’s external border, the appalling fate of many migrants who try to cross the Mediterranean and the lack of solidarity among EU member states all require that we take new steps. Every country must do its part.’

The king ended with a reference to a 96-year-old member of the resistance who, the king said, had stated recently that ‘I feel a responsibility to pass the message to younger generations that you must engage in resistance if necessary.’

‘As a young man this hero put his life on the line for the future of our nation,’ the king said.  ‘And now, 75 years later, the future is still what drives him. That is not only inspiring – it is a task we all share.’

Read the full speech (in English)