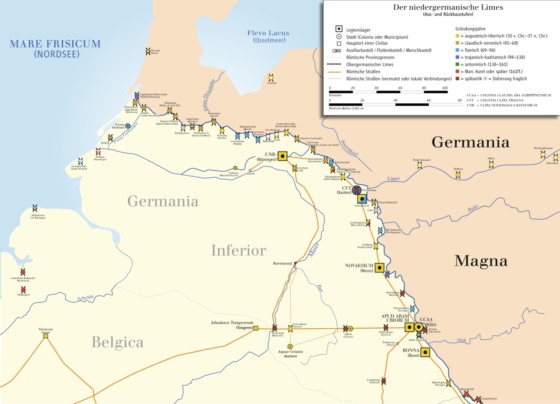 The Dutch-German border of the Roman empire is one step closer to joining other limes sites on the Unesco world heritage list. The local authorities of the provinces of Gelderland, Utrecht and Zuid-Holland have put together a nomination file which was handed to education minister Ingrid van Engelshoven last week.

If parliament approves, the Netherlands and Germany will together petition the world heritage committee, which will decide on the status of the limes during its annual meeting in July 2021.

The Roman limes – literally meaning ‘path’ – was a fortified border aimed at keeping the empire safe from marauding northern hordes. In the Netherlands the limes follows the course of the Oude Rijn river, which was a much bigger and more important waterway in Roman times.

The Roman army built fortresses, watch towers and roads along the river, remnants of which are still being found. The composition of the soil means part of the Roman infrastructure has survived in good condition.

In September last year a 125-metre stretch of Roman road was uncovered during work on the Rijnland Route motorway in Zuid-Holland. Archaeologists extracted 470 wooden poles, one of which bore the inscription COH II CR.

The inscription, which dates from around 125 AD, is short for Cohors II Civium Romanorum and refers to a group of 500 soldiers recruited from Roman civilian ranks who were specialised in carrying out and overseeing building work.

In 1996 archaeologists digging around what is left of a canal between the Rhine and the Meuse built by Roman soldiers stumbled upon a beautiful bronze face mask. Identified variously as a military parade mask and a mask worn in battle in order to intimidate opponents with its immovable features, its curly hair and intelligent expression quickly gained it the name ‘Gordon’, after the Dutch singer.

Some of the best-preserved sites included in the nomination file are a temple at Elst, a watchtower in the province of Utrecht, and a roof-tile kiln at Berg en Dal.

‘The limes connects 2000 years of history to the present,’ said Zuid-Holland provincial deputy Willy Zoete. ‘Our Roman history is at the basis of our good relations with the neighbouring provinces and countries. World heritage status will bring the limes to the attention of many visitors from inside and outside the old Roman frontier.’