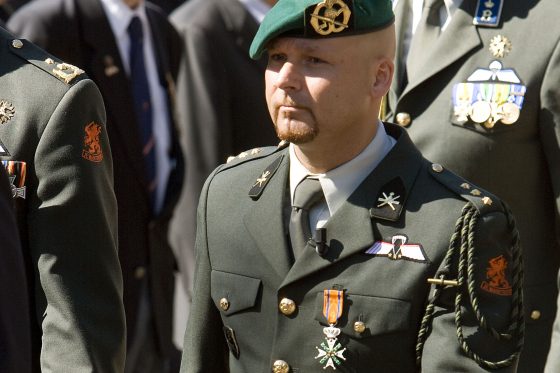 Kroon at the Binnenhof in 2009. Photo: defensie.nl

An official investigation into a decorated soldier who last year reported a breach of protocol during a secret mission in Afghanistan has been halted.

The NOS reports on Thursday that Marco Kroon, who had been awarded the Netherland’s highest honour for bravery, will not be pursued for the 2007 incident.

Public prosecutors said there was insufficient evidence in the matter, and that they could not reach any conclusions.

Last year, Kroon had reported to a superior that he had been kidnapped and abused during a mission in Afghanistan, escaped, and in the following weeks found and killed one of his kidnappers.

He released a statement through his lawyer about the events and said he ‘acted honourably and conscientiously’ and had to ‘neutralise an enemy who posed a serious danger to the operation and posed a risk to the lives of me and my men’.

Kroon was awarded the Militaire Willems-Orde by Queen Beatrix in 2009. Two years later he was acquitted of a charge of possessing drugs and weapons.