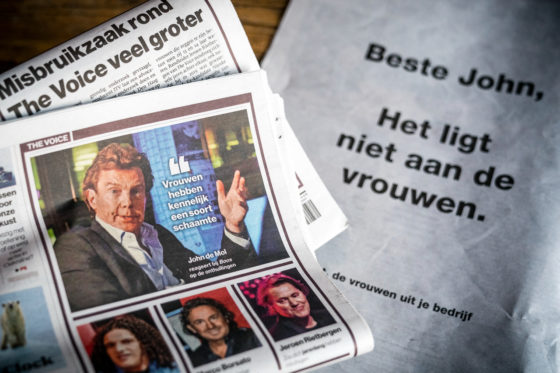 The scandal around The Voice of Holland erupted this week. Photo: ANP/HH/Rob Engelaar

Any hopes of a fresh start to 2022 are well and truly cancelled. RTL pulls the plug on its most successful TV show, the Voice of Holland, as allegations emerge of widespread sexual abuse. The first parliamentary debate of the new cabinet term begins with angry exchanges as MPs round on Geert Wilders for his language towards Muslims and women. Budget institute Nibud calculates that everyone will be poorer this year, but the cabinet still wants to break the link between minimum wages and pensions. All this and record coronavirus infections too. Meanwhile, a cold case team claims to have solved one of the biggest mysteries of the Second World War: who told the Nazis where Anne Frank’s family were hiding?

Ophef of the week: The Voice cancelled amid allegations of widespread sexual abuse

Infections up to almost 40,000 a day, one in four children missed school this week

Fringe movement: My walk-on part in the great hairdressers’ revolt

Parliamentary chair under fire as Geert Wilders goes on the offensive

Rents are rising again, Eindhoven and Rotterdam lead the way

Households will have €40 less on average to spend in 2022