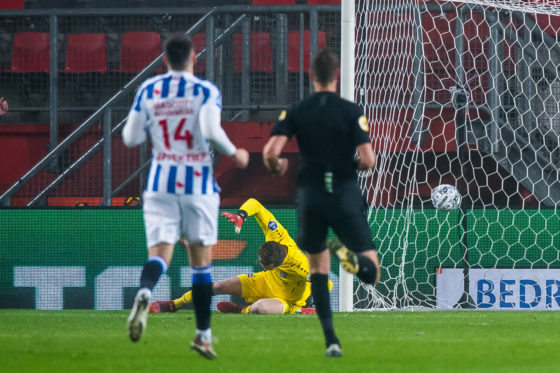 An early goal by Mario Götze was enough to earn PSV all three points at Groningen and retain their one-point lead at the top of the Eredivisie.

Head coach Roger Schmidt, who was boosted last week by the news that Israeli striker Eran Zahavi will return later this season, also brought on Joey Veerman as a second-half substitute following his €6 million transfer from Heerenveen.

Ajax kept up the pressure with an easy 3-0 win in Utrecht, with two goals for loan signing Brian Brobbey, recruited as a stand-in for Ivorian international Sébastien Haller during the African Nations Cup.

Third-placed Feyenoord lost ground at home to Vitesse as a mix-up between goalkeeper Justin Bijlow and Marcus Pedersen allowed Loïs Openda to roll the ball into an empty net for the only goal of the game.

A goalkeeping howler was also decisive in the match between Twente and Heerenveen. Xavier Mous seemed under no pressure when he exchanged passes with Sven van Beek in his own penalty area, but his heavy touch allowed Manfred Ugalde to poke the loose ball home.

Both netminders had a key role in RKC Waalwijk’s win at Go Ahead Eagles. The visitors’ Etienne Vaessen found Finn Stokkers with a long punt in the 21st minute that the striker lobbed in for the opening goal. Michiel Kramer tapped in the second when an attempted clearance by Warner Hahn fell at his feet.

Sparta Rotterdam’s reserve goalie Tim Coremans will also be having nightmares after he spilled a cross by Patrick Joosten into his own net to gift Cambuur Leeuwarden a 1-0 lead, but Adrian Dalmau rescued a point for Sparta in the second half.

AZ notched up their ninth win in a row in all competitions by overcoming a spirited Fortuna Sittard side 2-1. The winning goal came in the 61st minute when Dani de Wit pounced on a defensive error and crossed for Japanese winger Yukinari Sugarawara to score.

Bottom side PEC Zwolle remain four points behind Fortuna despite recording their second win of the season against Willem II, who lost their ninth straight league game thanks to a brace from PEC’s defensive midfielder Thomas van den Belt.

NEC shared the points with Heracles in a 0-0 draw that was mainly notable for the return of midfielder Rai Vloet, two months after he was involved in a car crash in which a four-year-old boy died.

Police said alcohol was a factor in the collision, which happened when Vloet was driving, but coach Frank Wormuth defended his selection: ‘The judge will decide. He [Vloet] is part of the Heracles family and we want to help him.’