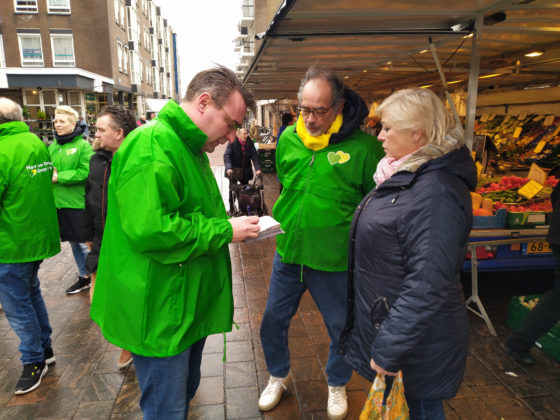 Richard de Mos campaigning in The Hague in 2022. Photo: DutchNews.nl

The leader of the largest party on The Hague city council, Richard de Mos, is going on trial on Monday accused of corruptly benefiting businessmen who bankrolled his independent group.

De Mos, 46, is standing trial in Rotterdam alongside two political colleagues and five local businessmen who gave a total of €110,000 in donations to Groep de Mos, also known as Hart voor Den Haag. Prosecutors say they were rewarded with preferential treatment by De Mos in his capacity as city councillor and alderman.

The party won eight of the 45 seats in last year’s local elections but was excluded from the coalition talks, partly because of the corruption investigation which has been running since 2019.

De Mos and his colleague Rachid Guernaoui, who is one of the seven co-defendants, were appointed as aldermen, or executive officials, in the coalition that ran the council after the elections of 2018 with Groep de Mos as the largest party.

The other parties withdrew their support, forcing the two men to resign, after police raided the Groep de Mos offices and De Mos’s home in October 2019.

The 51-page charge sheet includes allegations that in his spell as alderman for economic affairs, outdoor spaces and the city centre, De Mos gave his supporters access to drafts of council plans, breaching official confidentiality.

He is said to have tipped off Atilla Akyol, the former owner of the Opera venue in the city centre and a co-defendant in the case, that a number of late-night licences were about to be issued in the city centre on a first come, first served basis.

‘You need to get your application in straight away, and then I’ve arranged a night licence for you for 10 years,’ De Mos told Akyol in a phone call, the transcript of which was obtained by Nieuwsuur.

Akyol and his brother Erdinç donated a total of €40,000 to Groep de Mos, the businessman told a documentary, Napels aan de Noordzee (‘Naples on the North Sea’), produced by Powned.

De Mos is also alleged to have shared confidential plans for a €200 million culture centre called Amare with two property developers, Edwin Jansen and Michel Zaadhof, in the summer of 2018, before they were published by the council.

The public prosecutor has accused the eight defendants of forming a criminal organisation by using De Mos and Guernaoui’s position to secure public projects.

De Mos has vehemently denied any wrongdoing and described the investigation as a ‘political character assassination on an unprecedented scale’. He has questioned why the investigation has taken nearly four years to come to court and vowed to clear his name.

‘I’m glad that the court is finally able to look at the case and I have full confidence in a good outcome,’ he said.

De Mos filed an official complaint to police at the weekend over the leak of his criminal case files to the media. In 2021 he published a book, Mijn Verhaal (‘my story’) in which he rebutted the allegations of corruption and attacked former colleagues and associates who had testified against him.